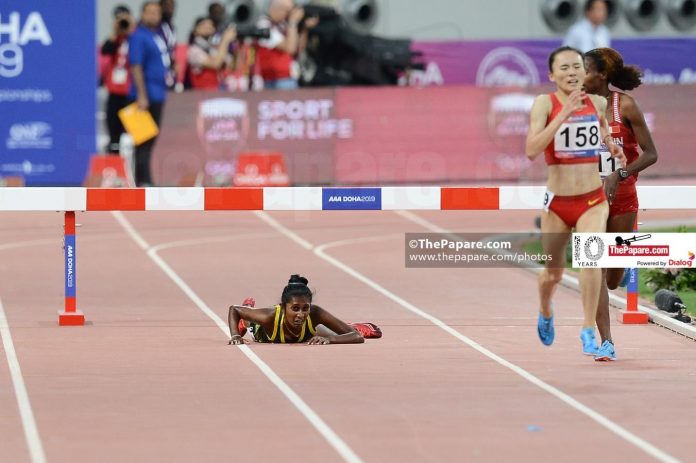 Steeple chaser Nilani Ratnayake was heartbroken on the third day of the Asian Athletics Championship as she missed out on a podium finish despite coming agonizingly close to getting one in the women’s 3000m steeple chase.

Vidusha Lakshani claimed Sri Lanka’s first medal at the championship winning bronze in the Women’s triple jump, bringing consolation to an otherwise frustrating day for the Island nation. Five Sri Lankan athletes took to the field at the Khalifa stadium in Doha in pursuit of Asian glory with three of them earning qualification to compete in the next rounds which will be held today(24th). 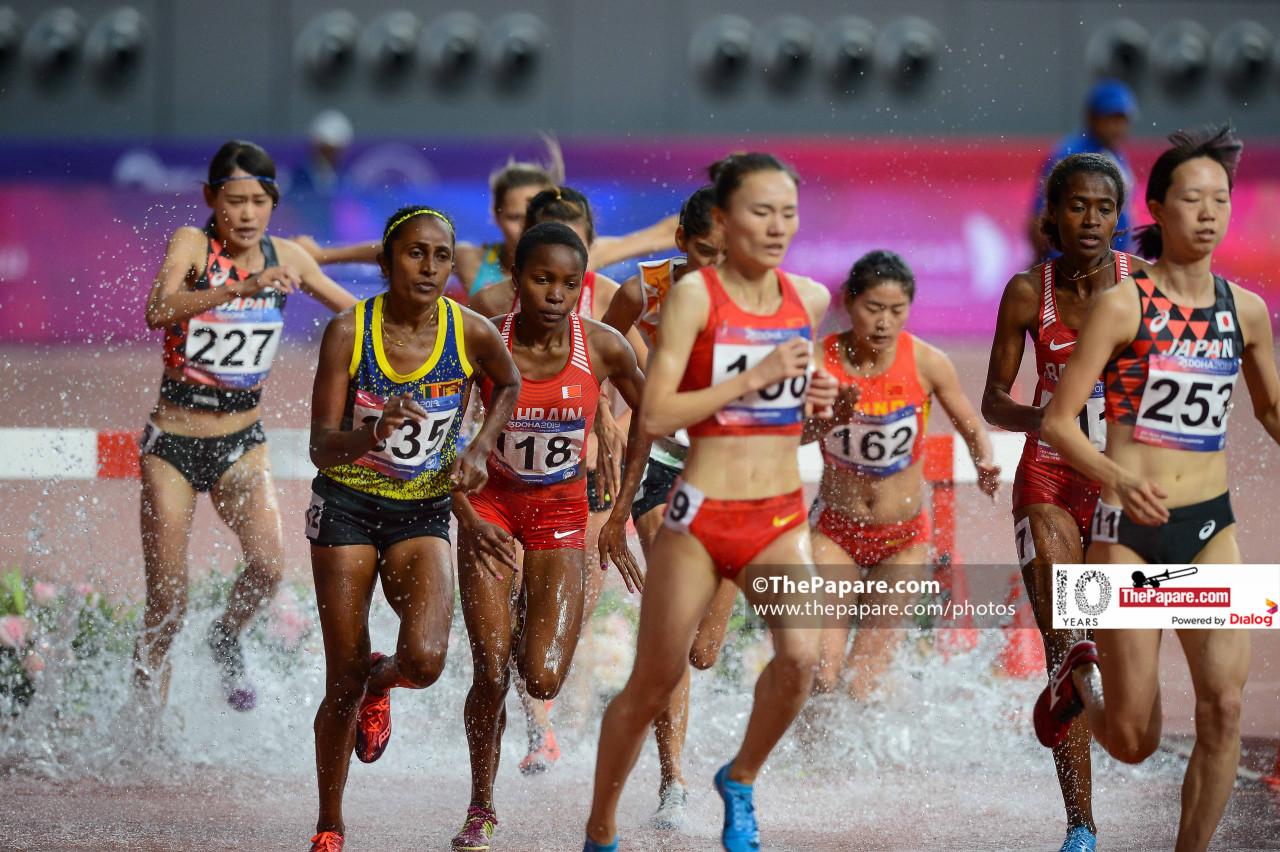 Steeple chaser Nilani Ratnayake missed out on what looked like a definite medal in the Women’s 3000m as she lost her balance and fell to the ground while clearing the last hurdle which was a mere 30m away from the finish line. Nilani looked solid from the onset of the race and kept a steady pace throughout the race alongside the pre-race favorite Winfred Yavi of Bahrain. With only 800m to spare Yavi shifted to a different gear and broke away from the rest of the runners justifying her pre-race favorite tag. Another set of athletes consisting of ShuangShuang Xu of China, Tigset Mekonen of Bahrain and Sri Lanka’s Nilani Ratnayake distanced themselves from the rest of the athletes, opening up an interesting battle for the second and third places.

Nilani and the Bahraini athlete Tigset  battled out for the Silver medal in the final lap of the competition with Nilani looking like she will finish strong in the home straight to take the Silver over the other two athletes who looked fatigued after the final water obstacle. However chaos struck as Nilani lost her footing and went to the ground soon after clearing the final hurdle which allowed the other two athletes to run away to claim the two podium spots. Ambitious Nilani crawled back to her feat in hopes of reclaiming a medal spot but had lost too much time in the mishap. Winfred Yavi of Bahrain won Gold clocking 9:46.18 while ShuanShuan Xu of China won Silver with Tigset Meknonen of Bahrain winning Bronze. It needs to be noted that despite having a fall that hampered her medal hopes Nilani clocked an impressive time of 9:58.55 just seconds behind her seasons best time of 9:55.15.

Hemantha Kumara competing in the first round of the Men’s 1500m delivered a well thought out tactical race to finish 4th and earn automatic qualification to the finals in the men’s 1500m round 01 – heat 01. Kumara clocked a time of 3:56.69 in what turned out to be the slower of the two heats with the 8th placed athlete of the second heat clocking a time of 3:52.94. Kumara who recorded a personal best time of 3:45.48 in Colombo just before departing for the Championship would be looking to put his good form to use in the all-important final today (24th). 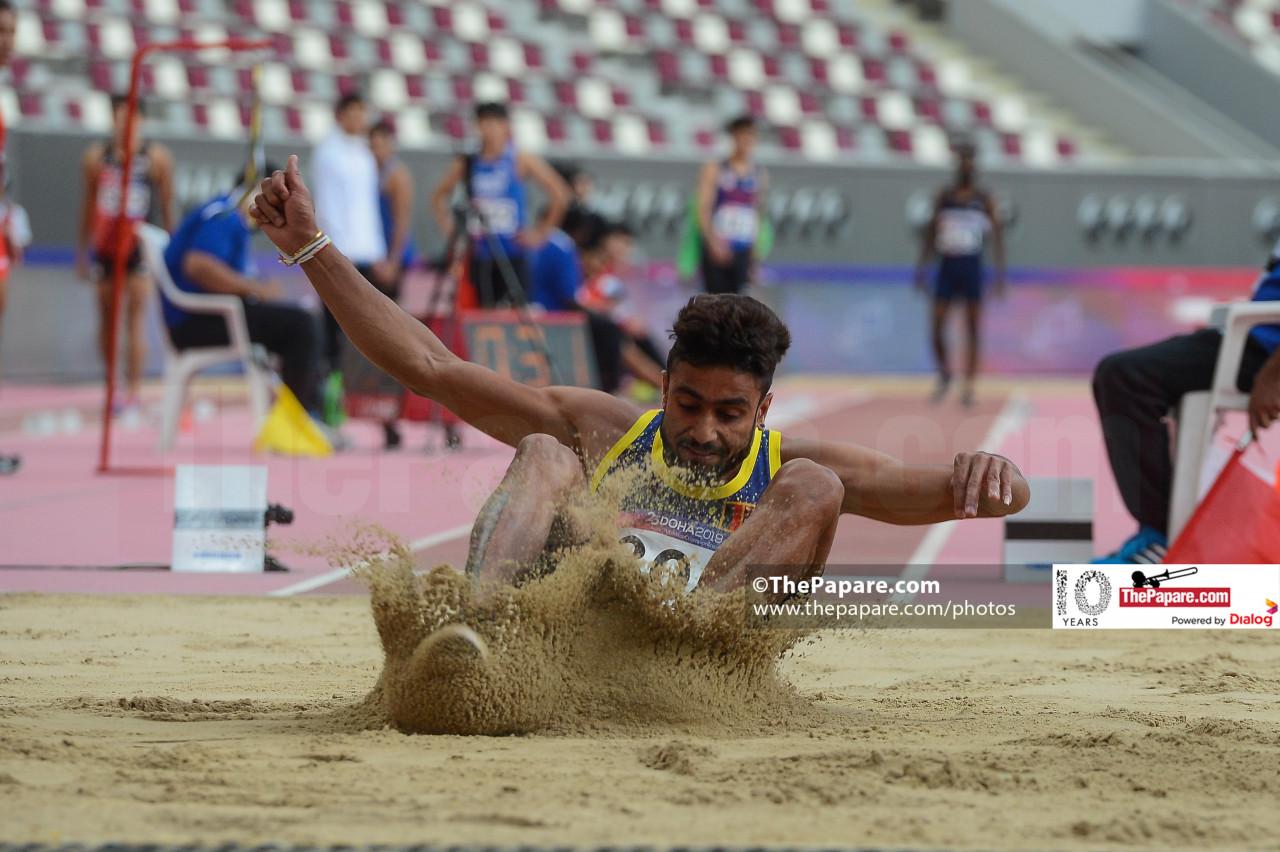 Despite looking rusty, the two long jumpers Dhanushka Piyarathne and Prasad Wimalasiri went through the qualification round to compete in the Men’s Long Jump final which will be held tomorrow (25th). 12 out of 22 athletes earned qualification to the final with Prasad Wimalasiri placed 9th and Danushka securing the 10th spot in the final. It was not an impressive performance by the duo who only managed best jumps of 7.57m & 7.57 respectively in what were chilly conditions for the Sri Lankan jumpers with the temperature reading 20 Celsius.  The top ranked athlete at the end of the first round, China’s Yaoguang Zhang put out a best performance of 7.86m. Prasad Wimalasiri holds a personal best of 8.14m while Dhanushka Piyarathne boasts a personal best of 7.95m, indicating that if both jumpers try and achieve their personal best Sri Lanka will be able to push their case for a medal finish in the Men’s Long Jump final today(24th).

Today (24th) will be the fourth and the final day of the 23rd Asian Athletic Championship with four Sri Lankan athletes alongside the Women’s 4X400m relay team competing here at Doha.

Sri Lanka’s #1 sports hub, ThePapare.com  will be at the Khalifa stadium, Doha, Qatar in the Arabian Peninsula to bring all the action of the Asian Athletic Championship to your fingertips. Watch out for  previews, live results, live photos, exclusive and insightful videos of the progress of the Sri Lankan contingent at the Asian Athletics Championship 2019.