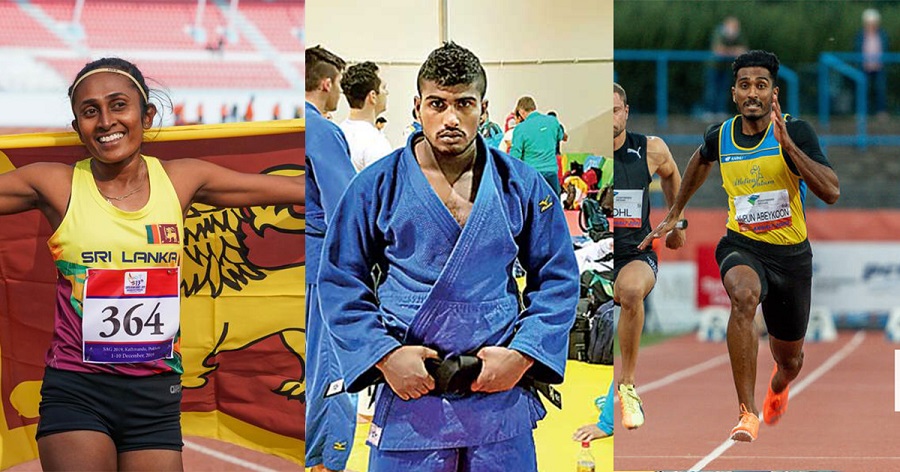 Yupun Abeykoon and Nilani Rathnayaka are set to complete Sri Lanka’s squad of nine athletes for the Tokyo 2020 Olympic Games which will be held from July 23 to August 8.

The other athletes who have booked their flights to the games are Mathilda Karlsson (showjumping – equestrian), Milka Gehani (Artistic Gymnastics), Chamara Dharmawardena (Judo), Tehani Egodawela (Shooting) and veteran Olympian Niluka Karunaratne (Badminton) who will be making this third appearance at the Olympics.

Besides the Athletes who are on board, two swimmers – Aniqah Gaffoor (100m Butterfly) and Matthew Abeysinghe (100m Freestyle) are waiting for confirmation of their entries from FINA expected to come by 1st of July.

Abeykoon, who had a very impressive run in the 100m circuit this season is currently ranked 49th in the World Athletics Charts as of 22 June 2021 (46 on Olympic qualification list). The 26-year-old athlete from Pannala has already made steady progress in the 100m event to reach Olympic Qualification based on his rankings.

Though he was unable to hit the Olympic qualification standard of 10.05s, Abeykoon registered a wind-assisted personal best of 10.09s in Dessau, Germany in May, which was preceded by a national record of 10.15s in Savona, Italy in the same month. 65 athletes have achieved the qualification standard, but only 39 of them have gained entry to the event on account of the quota of 3 athletes per NOC; this leaves a further 17 spots open for athletes to qualify via World Ranking and Universality Places.

Rathnayake will compete in the 3000-meter steeplechase event at the 60th Indian Interstate Championships today. She is also within the Olympic qualification quota (42nd position) based on her World Ranking (45). The Steeplechase event at the Olympics will see 45 athletes competing; 29 have already qualified via meeting the qualification standard, while 16 spots remain open as of 9.00 am today.

*Final confirmation on both athletes are expected to be released on July 1st, with the qualification deadline being set for tonight (29th).

Japanese authorities have requested Olympic athletes and officials from Sri Lanka and five other countries, hit hard by the highly infectious Delta variant of the coronavirus, to have daily virus tests for seven days before leaving for the Games.

Currently, all overseas athletes are being asked to have coronavirus tests twice during the four-day period before their departure for the Tokyo Olympics, which are set to start on July 23 after a year’s delay due to the pandemic.