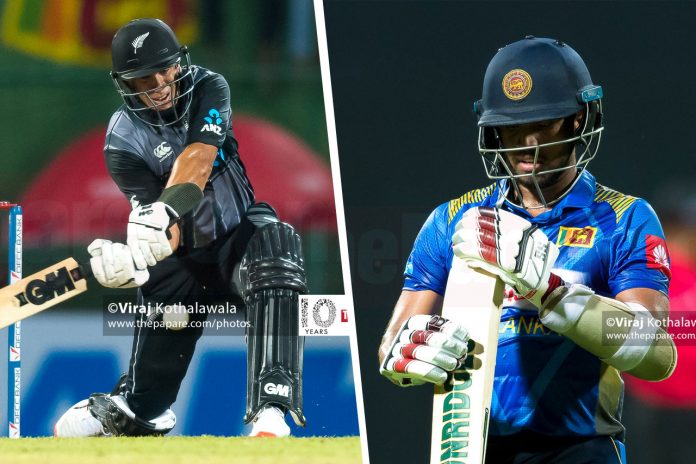 Starting off the run-chase poorly, New Zealand managed to reach the required target in the final over with 3 balls remaining amidst a rain interruption late in their innings.

Former Captain Ross Taylor coming in at a stage where the Kiwis were struggling on 39/3 in 7.2 overs, rescued his team with a crucial and match-winning partnership of 79 with big-hitting Colin de Grandhomme who also made a massive contribution anchoring the innings and breaking the shackles when required.

Taylor in fact was given a life when Dasun Shanaka, one of Sri Lanka’s best fielders dropped a sitter at deep mid-wicket. He also fumbled before he eventually held on to Martin Guptill’s catch off the same bowler, Akila Dananjaya in the very position.

Newbie Daryl Mitchell played a vital role in New Zealand’s victory as he took on the responsibility after Taylor’s dismissal which happened just before the rain interruption. Walking out with new batsman Mitchell Santner to resume the match, the two Mitchell’s weathered off Malinga’s storm beautifully by scoring 15 runs off his last over which also included 5 wides.

Before the Kiwi middle order clicked, Lasith Malinga dented them with a signature Yorker to dismiss Colin Munro. Debutant Wanindu De Silva bowling his heart out was the second best bowler for Sri Lanka with figures of 2/21. Fast bowlers Isuru Udana and Kasun Rajitha were expensive while Akila Dananjaya was targeted by Taylor as he went for 30 in 3 overs.

Lasith Malinga also broke Shahid Afridi’s record to become the highest wicket-taker in T20Is with 99 wickets, 1 more than Afridi’s 98. Malinga was expected to reach 100 and become the first ever bowler to achieve the feat but was denied by the Kiwis smart batting towards the end.

Early in the day Lasith Malinga opted to bat first after winning the toss saying that he wants his young team to bat freely and sent the two Kusals, Kusal Perera and Kusal Mendis to open the innings. This was something unexpected and Malinga also had hinted of a new batting order in the pre-match press conference yesterday.

Mendis promoted back to his most successful batting position in T20Is, justified his captain’s decision with a scintillating knock of 79. He provided Sri Lanka with a cracking start hitting 2 fours and a six in the 4th over of the match, bowled by Seth Rance, which costed the Kiwis 19 runs before Mendis’ partner Perera mis-hit a Tim Southee low full-toss to get dismissed for 11 runs.

With the introduction of spinners, Mitchell Santner and Ish Sodhi, Sri Lanka were denied of boundaries for 31 balls until Mendis broke the shackles with a beautiful flick off the pace of Scott Kuggeleijin for four. Sri Lanka lost Avishka Fernando during this boundary drought after a 17-ball 10 as the opener batting at number 3 found it difficult to put away the Kiwi spin duo.

Niroshan Dickwella batting at number 4, which is only the second time he didn’t open the innings in a T20I, played second fiddle to Mendis until he was out caught brilliantly by Martin Guptill. Dickwella and Dasun Shanaka were able to accumulate a modest 20 runs off the 17 balls following Mendis’ dismissal before Rance’s last over went for 23 runs courtesy of 2 sixes from Isuru Udana and 1 six from Shanaka.

In bowling for New Zealand, Rance replacing injured Lockie Ferguson, went for 58 runs in his 4 overs while Captain Southee picked up 2 wickets. Ferguson has also been ruled out of the entire series due to a fractured thumb.