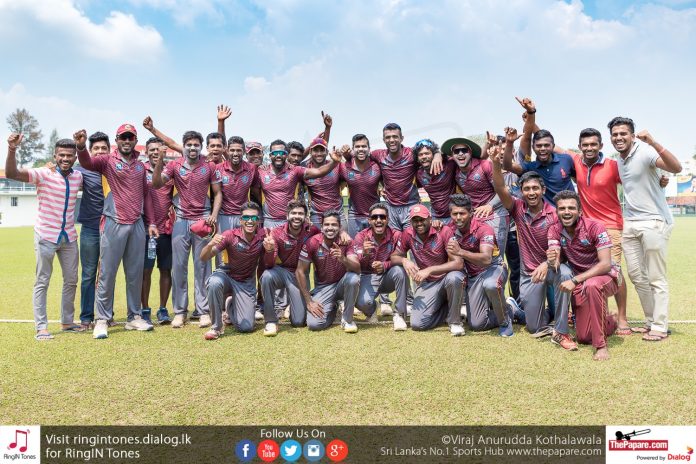 A dramatic end to the Sri Lanka Cricket (SLC) Major T20 saw NCC overcome CCC in a thrilling final by just 6 runs at the P. Sara Oval on Thursday.

CCC skipper Ashan Priyanjan who won the toss and opted to bowl first on a batting paradise, reduced NCC to 2/07 in just the second over of the match. Mahela Udawatte joined Bhanuka Rajapakse and the duo added 126 runs for the third wicket in just 85 balls as the NCC innings seemed to get back on track.

Bhanuka Rajapakse went on to make 79 runs off 51 balls inclusive of 5 sixes and 6 fours while Udawatte was dismissed for 68 inclusive of 3 sixes and 4 fours as NCC put up what looked like an above par 183/7 at the half way stage.

The ‘Malinga-like’ right arm seamer Nuwan Thushara bowled impressively for CCC as he captured 4/32 in his allotted four over spell.

CCC got off to a flying start through their make shift opener Sachith Pathirana in reply, as they reached 82/1 in just the 9th over of their innings. Pathirana’s dismissal for 47 sparked a collapse for CCC as they lost four wickets for just ten runs.

Wanindu Hasaranga who has been in good form right throughout the tournament once again hit a purple patch as he seemed to be guiding CCC towards the target.

A sudden ‘beamer’ delivered by Lahiru Kumara struck Hasaranga on his right shoulder. He appeared to be in plenty of pain and didn’t seem like the same batsman after the blow. Lahiru Kumara managed to dismiss Lahiru Madushanka(19) and Hasaranga(42) in consecutive deliveries, after the duo added 63 for the sixth wicket.

Wickets continued to fall as CCC kept trying hard and the pendulum kept swinging both ways, before Chamika Karunaratne delivered the final nail in the coffin for CCC when he dismissed Lahiru Gamage to seal a sensational 6 run win for NCC. Karunaratne was also the initiator of the CCC middle order collapse as he capped off a brilliant game to finish with top figures of 4/28.