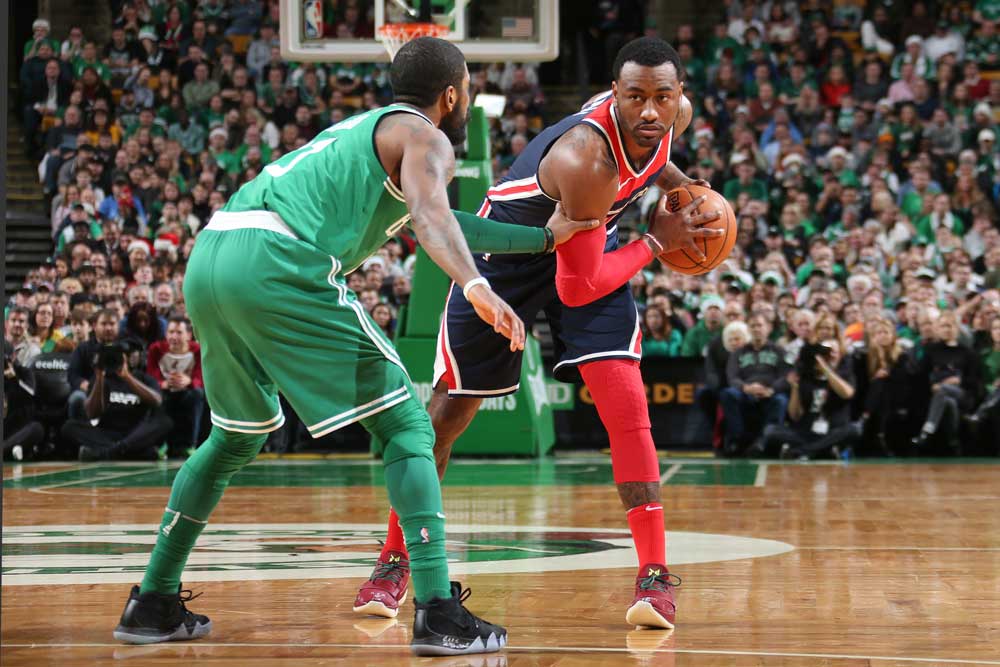 If anyone thought Christmas couldn’t get any better after watching Cavs vs Warriors and Thunder Vs Rockets, they were completely mistaken. Here’s a recap on the rest of the matches on Christmas eve.

Wizards with their kind of magic

Celtics had one of the best starts for a season that any team can ever hope for but lately they have been struggling and on Christmas Eve, the Wizards took them down, handing them a L for the 5th time in last 10 games.

The Wizards started off great with a 30 point 1st quarter and except for the 2nd quarter, they outscored the Celtics which resulted in an 8 point differential in the final scores; 103-111.

All five starters for the Wizards scored in double digits and the elite backcourt of John Wall and Bradley Beal scored 21 points with 14 assists and 25 points with 8 rebounds respectively. Contributions of Otto Porter and Kelly Oubre Jr. of 20 and 16 points each facilitated the Wizards offence, mainly through their efficient perimeter shooting.

Despite shooting a meagre 23.1% from the 3 point territory, the Wizards never let the Celtics gain a lead until the 4th quarter as they scored a season high 60 points on the paint in the process.

With 6:18 left in the game, C’s gained a 5 point lead with a 28 foot 3 point made by Kyrie Irving to which the Wizards answered with a quick spurt of 12-0 run, capping it with a dunk by Beal off a turnover.

Irving was unable to get his hands on the ball to take shots during the last few minutes which resulted in a scoring drought and the Wizards comfortably stayed on top as John Wall happily greeted the crowd saying “Merry Christmas” as the buzzer rang.

6 Celtics scoring double digits couldn’t suffice the offensive necessities but it didn’t stop Irving from weaving through the Wizards defense, drawing “ooh”s and “aah”s from the crowd.

Irving and Tatum scored 20 points each, leading the Celtics though they fell short at the end to the better executed “Wizardry”.

Despite the impressive start to the season, the 76ers didn’t have a satisfactory month as their last 10 games record reads 2-8. Nevertheless, ruining Christmas for Knicks fans was well accomplished by the 25 points and 15 rebounds from Joel Embiid and 24 points and 6, rebounds with 4-8 at 3 point range by J.J. Redick. 105-98 was the final score.

.@JoelEmbiid goes for a team-high 25 points, 16 rebounds and 3 blocks at The Garden. pic.twitter.com/4sk1ZcRsZF

76ers led by 2 at half time as the scores read 50-48 after two neck and neck quarters. It was at the 3rd quarter that Philly settled into a groove and started pushing themselves into a lead. With 8:59 left in the 4th quarter, the sixers were up by 9 points and they went along to score 26 points with Redick and Embiid dazzling the New York crowd with their shooting skills. With Ben Simmons having an off-night scoring only 8 points, T.J. McConnell stepped in big time to score 15 points off the bench.

Dominance from the 76ers shouldn’t diminish the performances of the Knicks. Enis Kanter having the hot hand scored 31 points and grabbed 22 boards while Kristaps Porzingis scored 22 points, 7 rebounds and 5 blocks in the losing effort even after being favored to win for 3 quarters.

From the whole @Lakers bench arose such a clatter.
Because all their hopes of winning were instantly shattered!

The Wolves and Lakers match up, being the last for Christmas Eve marked the only ball game with either party ending with a comfortable lead. 121-104 final score made the Timberwolves tweet rhyming poetic compositions throughout the day as they took home a W with 5 of the roster scoring 16+ points.

Lakers who were playing without 3 of their starting 5 due to injuries (Lonzo Ball, Brandon Ingram and Brook Lopez), only could gain their biggest lead of 2 points, just 30 seconds into the 3rd quarter and for the rest of the game, Wolves made sure to keep pushing up the pace and when the Lakers failed to score at the same rate during the 4th quarter, the gap only got wider.

In the losing effort, Kyle Kuzma the Lakers rookie sensation, scored 31 points which included 6 made 3 points thus finishing with the most points on a Christmas day after LeBron James.

Wolves shot 58.3% from the field which easily provided the upper hand over the young Lakers who have lost 3 consecutive games now, despite leaving it all out on the court.

So that’s a wrap on the Christmas day matchups and here’s a clip of the best plays of the day.

Once in a while you get to hear what the players say on the court and Christmas is so special that we get to hear a lot more than what we usually do.

Festive season does really lighten the mood and it surely brings a smile to see our favorite players of the league, having fun on the court while we enjoy their display of balling skills.

Stay with ThePapare basketball throughout the season as you did this year and to all the ballers and avid basketball enthusiasts out there, Merry Christmas and a happy new year! Keep balling!