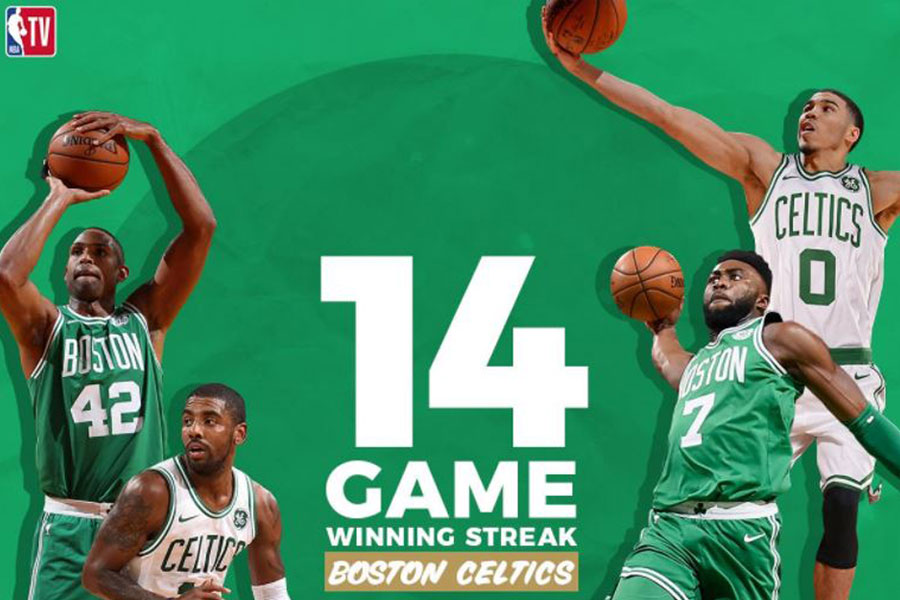 16 games into the regular season and a 14-game winning streak! Yes, you read that right! The Boston Celtics are now the first team in NBA history to win 14 games immediately following an 0-2 start or worse.

Celtics had a hectic off season with the acquisitions of elite point guard Kyrie Irving and small forward Gordon Hayward and many experts of the sport ruled the Celtics out when unfortunately, Hayward landed awkwardly on his left foot on the opening night at Cleveland, casting him aside for the rest of the season with a broken ankle.

Irving, who is nothing but a fighter, is now proving the doubters all wrong while rallying his team mates, who have stepped up big time along with the assistance of their genius head coach, Brad Stevens.

Not only without Hayward, the C’s had to manage a couple of games without their 4-time all-star center, Al Horford due to concussion and one game with both Horford and Irving out due to a facial fracture to the latter. Wondering who stepped up big time to soldier through during those troublesome times?

It was 21-year-old Jaylen Brown and the 19-year-old Jayson Tatum who were the 3rd overall picks of 2016 and 2017 NBA drafts respectively.

An 18-point comeback against the Hornets and Thunder should be enough to explain how great the Celtics are playing both offensively and defensively but digging their way out of a 17-point abyss against the Warriors was the cherry on top of their run so far.

The Celtics have been receiving high praise for their efforts and hustle at the defensive end and it has been their match winning secret.

Stevens says our length and ability to switch were difference makers tonight.

(‘Coach Stevens after the win against Hornets’)

The Celtics roster consists of athletic, versatile players thus enabling them to remain as a top defensive team throughout the season.

The Celtics starting backcourt is 6’7” and 6’3” with Brown and Irving while the 6’8” small forward Tatum is paired with 6’10” center; Horford and 6’9” Morris at power forward. When Morris is replaced with 6’10” Baynes according to the teams’ requirement, oppositions only score 90.3 points per 100 possessions.

With such big bodies and lengthy arm spans, it’s no herculean task to shrink passing or driving lanes to the basket or to keep the opponents within their reach and contest the scoring opportunities. Apart from the players being physically gifted, their ability to read the plays and be at right position defensively is impressive.

8.4 steals and 3.9 blocks per game should tell you the story of what physical reach mingled with basketball IQ could do defensively.

Once the starting five step on the floor, every one but Irving can switch into any position and make plays with ease and even when there’s a mismatch on Irving, either Tatum or Brown instantly re-switch. For a moment one might think about using the window of opportunity during the re-switch to attack but the hyper-alertness, approximate 7ft wingspans and the athleticism of the Celtics backcourt doesn’t allow such charity.

Numerous turnovers leading into fast breaks and the ability to close out on shooters at the perimeter have helped the green clad squad immensely and it’s about time the rest of the league took notes, not to underestimate the Celtics defence.

Boston has held its opponent to less than 100 points in 12 of its last 14 games. No other NBA team has done so more than 9 times this season.

Team’s shooting stats, as above mentioned may not be mind blowing but paired with the defensive capability that the C’s posses, it’s highly lethal. If they are to make a stronger case for a championship run, better shooting percentages and a slight tweaking of assists per game will do the trick as they currently rank 17th with 21.6.

Celtics ranking 1st in the Eastern Conference means that the LeBron James led Cavaliers (9-7 record) have had to take a back seat at the moment and if the Celtics continue playing with the same intensity, there’s an exciting chance for them to reach the NBA finals from the east.

Curry on the possibility of facing the Celtics in the Finals:

“I hear the weather’s great here in June.” pic.twitter.com/CvcuMPs7mL

That’s a wrap for this week about the Bean City ball club. Until next week, keep balling!

Bean City Ballers on a roll

NBA`s trade-offs in a single shot