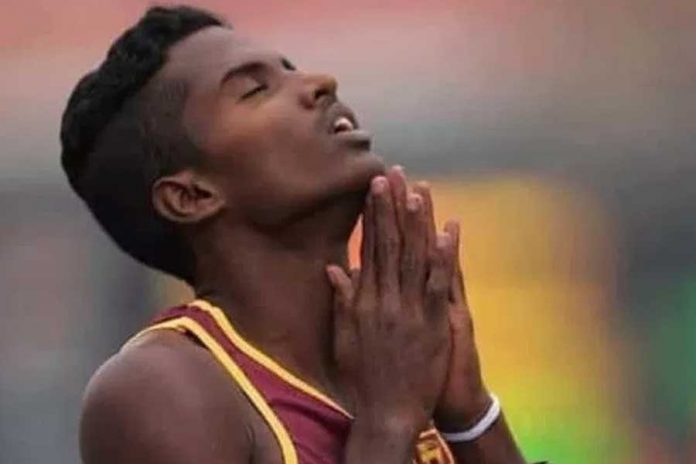 Navishka Sandeesh of St. Sebastian’s College Moratuwa won Sri Lanka’s first medal at the 3rd Asian Youth Athletic Championship 2019 held in Hong Kong, when he claimed Silver in the Men’s 400m, narrowly missing out on a gold medal after a fierce competition in the final few meters of the race.

Navishka, who won the heat he participated in yesterday with a spirited run, continued his good form in the final of the event. After a measured run in the opening half of the race, competing in the 5th lane Navishka put Abdul Razak, the Indian athlete who was the eventual winner of the race in the closing few meters. Razak took gold with a time of 48.17secs while Navishaka won Silver with a time of 48.26 and Yefim Tarrasov of Kazakhstan finished with Bronze clocking 48.59secs.

Navishka’s Silver medal was the only Silver lining for Sri Lankan in an otherwise bleak day where the other Sri Lankan athletes who competed in finals, failed to excel in their respective events.

Despite managing to narrowly qualify for the finals, Kavindi Sanjana was placed last in the Women’s 400m final and was far from her best, clocking a disappointing 1:00.90.  Sadeepa Henderson managed to qualify for the semi finals of the Women’s 200m after finishing with the 5th best timing despite being third in the heat she took part in. However, she failed to get through the semi final stage of the Women’s 100m which was held in the evening session as she was placed fourth in second semifinal heat and clocked a time of 12.44secs missing out on a spot in the final with the last selected athlete being fractions better than Sadeepa.

Related – Four juniors to the next stage at Asian Youth Champs

Similarly, Shermal Milinda, Sri Lanka’s other young sprinter managed to earn qualification to the Men’s 200m finals, finishing as the 8th placed runner, clocking 22.19secs. Shemal had a dismal run in the Men’s 100m semifinal where he was placed 7th only managing to clock a disappointing  time of 11.30 in the heat.

Skipper of the Sri Lankan contingent, Shanika Lakshani managed to earn qualification to the semifinal of the Women’s 400m Hurdles after being placed third in her heat clocking a time of 1:04.60 and was ranked 5th in the overall standings.

More Sri Lankan athletes will take part in finals tomorrow which is the third and the final day of the 3rd Asian Youth Athletic Championship. Visit www.ThePapare.com/Athletics as we will bring you all the accurate updates on the youngsters who are representing the Island nation in the regional competition.