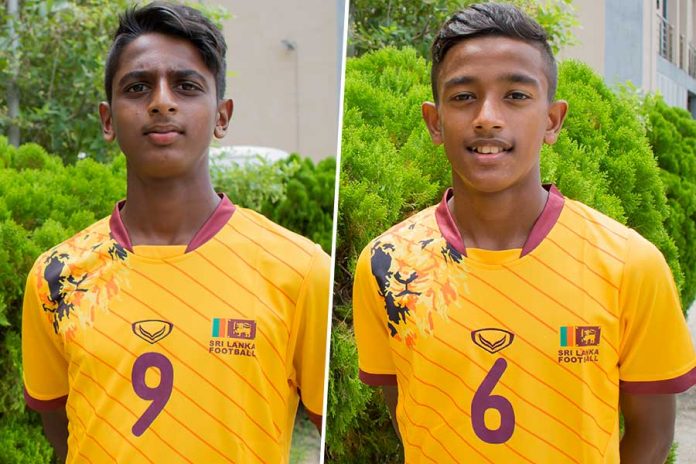 Mohamed Mihran’s injury time goal secured a stunning 3-2 comeback win against Bhutan in their opening fixture in the SAFF U15 Championship 2019 played at the Kalyani Stadium, India.

Bhutan were coming into the tournament after gaining valuable international experience in the 2019 UEFA Assist U15 International Tournament. In that, they defeated Maldives and Saudi Arabia 2-1 in the group stage but lost to Latvia in the final.

The confidence showed on the Bhutanese boys as they worked the ball from the back. With ball in possession they created and opened the scoring in the 7th minute through Kinzang Tenzin. Sri Lanka, who started with two up front, did get to the opposition half on numerous occasions and got into the game gradually.

Lankans got a good opportunity to score when they were awarded an indirect free kick inside the opposition penalty box for a back-pass offense. However, poor execution let the Bhutanese off the hook.

Thomian Mahith Manvidu should have equalized before the break when he was through on goal dribbled right up to the six-yard box but did not pull the trigger. When the shot was finally taken, the chasing defender blocked it.

Second half started as the first with Bhutan winning a corner immediately. This time around they converted it to a goal through Sonam Chozang with the help of some poor defending.

Mahith got another opportunity yet again inside the penalty box but failed to take a shot and tried to find a pass and the chance went begging.

Theshan Thusmika then scored a sublime free-kick in the 57th minute to make it 2-1. Lankans were awarded a free kick right on the edge of the box. Thusmika stepping up beat the keeper all ends up as he went over the wall to get a goal back for the boys in yellow.

Bhutan pressed high and that created more opportunities for Sri Lanka only to miss in front of goal. With 17 minutes still left on the clock Mohamed Mihran scored against the run of play in a goal mouth scramble. Bhutan defense paid the prize for not clearing the lines as Mihran scored with the 3rd attempt.

Sri Lanka looked strong in the last 10 minutes and clinched the win in the stoppage time with a clean header by Mihran off a free kick from the right flank.

Mane and Firmino give Liverpool 2-1 win at Southampton

Sri Lanka Under 15 Boys’ Football Team off to India