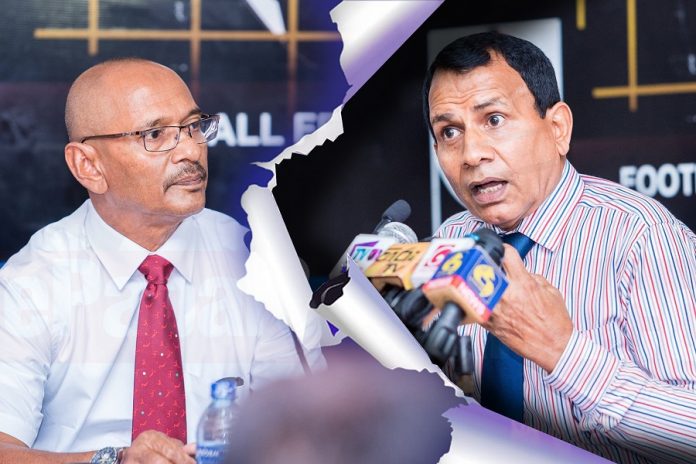 
The formal complaint was made on 15th July ThePapare.com learned through local newspapers.

Sri Lanka has been drawn in Group ‘H’ in the Round Two draw….

A long standing dispute between the two has been brought to the attention of the Authorities at the Football Federation of Sri Lanka on numerous occasions, however no action has been taken so far.

Senaweera has spoken to a close colleague and mentioned that Packeer Ali has been behaving rudely and verbally abusive towards him on numerous occasions. This has resulted in him not being able to fulfill his duties towards the National Squad.

He has also reportedly said that the Head Coach gets involved in matters not related to him, thus leading to altercations.

It is reported that the incident which triggered this new chain of events occurred when Senaweera returned to the Beddagana Football Training Facility after a personal trip abroad, at which point Packeer Ali is said to have verbally abused and reprimanded the manager.

The two of them have worked together as Manager and Head Coach of the National Team on a number of tours.

On a recent tour to Japan where the host had presented valuable training material to the National Squad, both parties had a dispute regarding the usage of the goods. The FFSL too is aware of the incident and the previous incidents but are yet to solve the problem.

Speaking to ThePapare.com Sunil Senaweera had this to say;

“I cannot comment on the matter as the Football Federation will be conducting an inquiry and it is nothing to be too concerned of.”

With the National Team set to play the 1st of its 8 FIFA world cup qualifying matches on 5th September, this is a matter the Football Federation of Sri Lanka need to solve immediately.

ThePapare.com has contacted the FFSL and Nizam Packeer Ali who are yet to make a formal statement on the situation at the time of publishing the article.