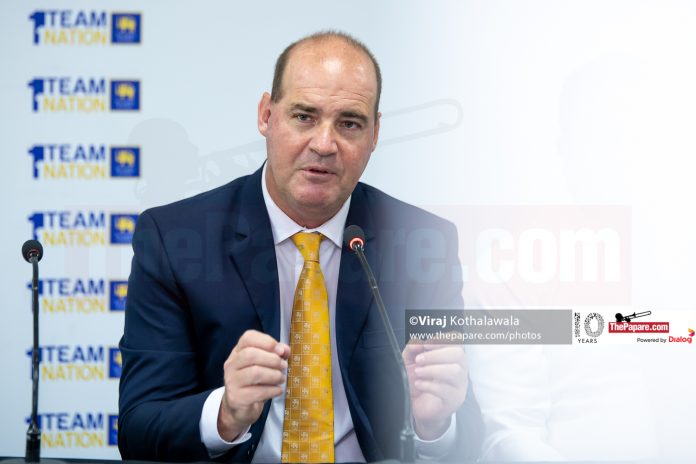 The official press conference for the announcement of Sri Lanka’s new head coach to be, Mickey Arthur was held today (05), at Sri Lanka Cricket.

Arthur previously coached South Africa from 2005 to 2010, and Australia from 2011 to 2013 before his most recent three-year assignment with Pakistan where Pakistan reached the highest rank in T20Is and won the Champions Trophy 2017. Arthur will become Sri Lanka’s 11th head coach in the past eight years.

Addressing the media, Mickey Arthur said, “The amount of talent that we have here is great. But teaching them how to use that talent and when to use that talent is what is exciting for me. We have the ICC Test championship and ICC T20 World Cup just around the corner. We are in it for win it. Every time we go out on the field, we represent a very proud cricket nation. We want to go and win every game we play”

“My secret mantra is hard work. When I came to Pakistan they were lagging behind the race and they made it up. It was exciting to see those players develop and it was a great journey to go on. I was impressed with the level of fitness of the Sri Lanka players. We can always improve. We will train like the best in the world train”– he added.

Mentioning the plan for the next T20 World Cup Arthur concluded, “We got about 8 months ahead of T20 World Cup in Australia, our short tour to India in January will be really important. We have got to build a brand that will be successful in Australia and then we got to put the players around that brand, give them role clarity and stick with them being consistent with selections. Australia will be tough, but we have got to find a way to compete there”

Arthur’s first assignment for Sri Lanka will be against his previous team, Pakistan in a 2 Test Match tour in Rawalpindi and Karachi while Sri Lanka will travel next to India for a 3-match T20I series.