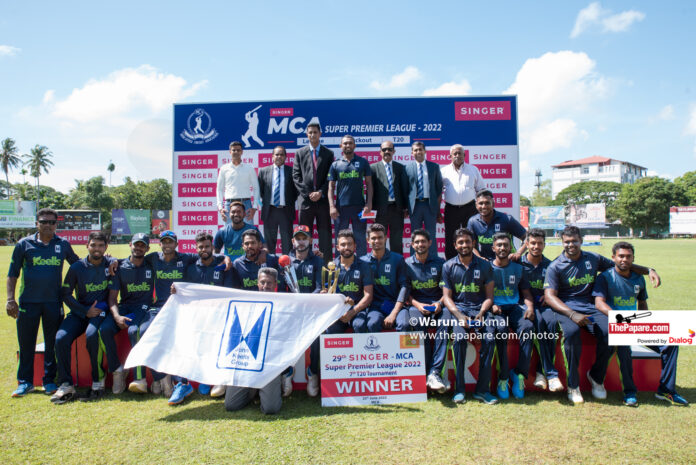 John Keells Group (A) were crowned champions of the MCA Super Premier T20 Tournament, as they defeated MODE Engineering by 4 runs in the final held today (25th June), at MCA Grounds in Colombo.

After been put into bat first, John Keells got off to a shaky start, losing 4 top-order batters for just 22 runs inside the powerplay. However, number three batter Kavin Bandara and number six batter Sachitha Jayathilake built a match-defining partnership for the 5th wicket, adding 94 runs.

Jayathilake stroked a blistering knock of 62 runs off 39 balls with 7 sixes, while Bandara added 42 runs off 33 balls with 2 fours and 2 sixes. Arul Pragash, Sandakan Pathirana and T. Vithushan starred with the ball for MODE Engineering, picking up 2 wickets each.

In reply, MODE Engineering could not start well with the bat either, as they lost the first 4 wickets for just 31 runs. Wicket-keeper batter Sasindu Nanayakkara and Skipper Dushan Hemantha rebuilt the innings, adding 69 runs for the 5th wicket, but it was not enough to carry their side over the line as MODE Engineering fell short of the target by 4 runs.

Skipper Hemantha’s blazing knock of 54 runs off 20 balls with 7 sixes was the highlight of MODE Engineering’s innings. Ishan Jayaratne (3/14), Malinga Amarasinghe (2/25) and Sachitha Jayathilake (2/25) impressed with the ball for John Keells sharing 9 scalps between them.