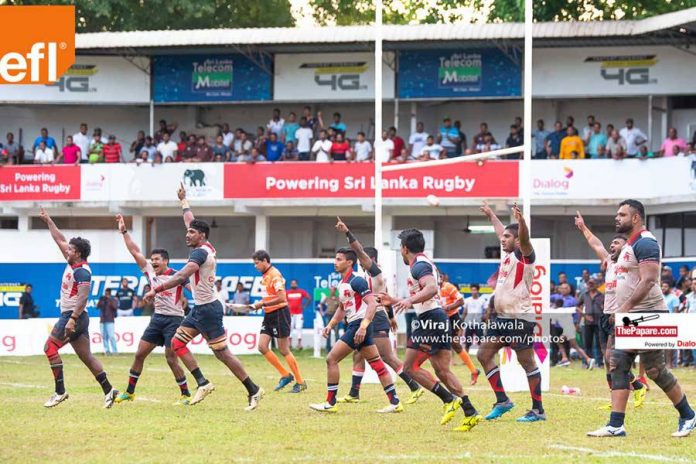 Kandy Sports Club secured their 13th win of the season and keep their unbeaten tag intact as they overpowered Havelocks 33 points to 12 at Nittawela. Kandy’s defence, in particular, was brilliant when Havelocks had ample opportunities to score but couldn’t cross over until the last 15 minutes of the game.

Nigel Ratwatte kick-started proceedings and Kandy scored in the opening minutes of the game as they found themselves close to the try line. Ratwatte made a brilliant cross kick where the ball came into the hands of Danush Dayan. Tharinda Ratwatte missed the conversion from the difficult angle. (05-00)

Havelocks were out of sorts as none of their lineouts were clean and couldn’t score despite the number of penalties being offered to them. Things only went from bad to worse as Zayan Sabare was yellow carded and Havelocks had to play with 14 men in the park. Kandy found themselves in the Havelocks red zone yet again and Diluksha Dange scored a try under the post off an excellent set-piece move from the scrum. This time Ratwatte cleared the easy conversion. (12-00)

Kandy had a brilliant defence as the third row managed to turn over possession on a number of occasions, Tharindu Chathuranga was sent to the sin bin for not being away 10 meters. Dange almost scored his second try but was bundled out into touch. Havelocks was kept scoreless throughout the first half.

The second half started in typical Kandy fashion as poor defence resulted in scoring a try off Lavanga Perera. Havelocks were not organised to counter-attack and were caught by surprise as Kavindu Perera almost made it to the line but managed to pass the ball to his player. Tharinda Ratwatte added the extras. (19-00)

For nearly 20 minutes, Havelocks were occupied in the Kandy half and were unable to score a single try. In fact, 2 tries went begging as the ball was held up and the third 5m scrum was botched by a terrible knock-on by Lasindu Karunathilaka playing at number 8. The rolling maul  was tried the on several occasions but didn’t make any progress. In the 63rd minute, Kandy finally found themselves in the opposition half as Kavindu Perera once again made valuable meters and Tharindu Chathuranga dived over for the bonus point try, which was easily converted by Tharinda. (26-00)

Mithun Hapugoda sparked some hope for the Pinks and he jinxed his way to the right corner close to the last 10 minutes of the game to salvage some pride. Sandesh Jayawickrama failed to convert from a difficult angle. (26-05)

Kandy replied soon after the restart with a try of their own as Oshan Perera cut round the Havelocks defence untouched and Kandy sealed the game after scoring their 5th try of the game. This time Nigel Ratwatte carried forward the kicking duties and added 2 more points to the Kandy score. (33-00)

Havelocks had one last move to pull off as their rolling maul was used to great effect and Fajudeen touched down in the dying moments of the game, this time Jayawickrama’s conversion was successful. Kandy’s defence was the story of the entire game and Buwaneka Udangamuwa was adjudged as the best player for his defence.