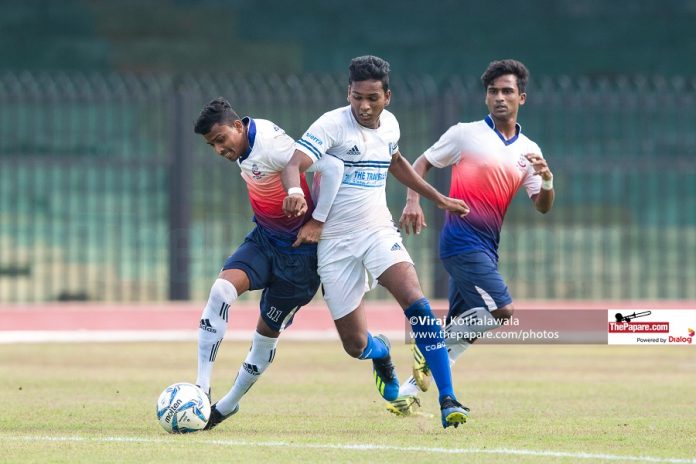 Chalana Pramantha scored the goal of the tournament so far to help St. Joseph’s College in a 2-1 come back win against Maris Stella College at the Sugathadasa Stadium in the first Semifinal of ThePapare Football Championship 2018.

Maris Stella got off to the perfect start in the game when the referee pointed to the spot for a very soft penalty. Tharinda Silva dribbling to the box got the touch and went over.

Stepping up to take the kick he hit the post and the rebound was bizarrely slashed into his own net by Sayura Bimsara.

With the shocking start the Josephians gradually got in to the game and was penetrating the Maris Stella goal.

Prakash Perera was called in to make a save early from Chamath Rashmitha when he responded quickly for a through ball.

The Josephians were then rewarded in similar fashion when Shenal Sandesh was brought down and the referee immediately pointed to the spot.

Nimesh Cooray stepped up and slotted to equalize for the Maradana boys.

The game then on was a stop start affair as both teams were guilty of giving away easy possession and fouls.

Execution of corners and free kicks from both teams was also poor as many opportunities to attack were squandered.

Marshal Kodikara made a vital save just before the break off a Tharinda Silva shot to go to half time all square.

The second half was no different as the first as both teams struggled to hold on to possession. The Josephians were guilty of conceding too many fouls which played in to the Maris Stella hands.

Chalana Pramantha got the first opportunity in the half with a shot from the left flank which he couldn’t keep down to trouble Prakash Perera.

Continuous fouling saw Asitha Fernando of Maris Stella and Thishan Fernando of St. Joseph’s getting in to the referees books.

In the 65th minute Chamath Rashmitha found him self in the box when a corner deflected to his path. His shot was straight at Prakash Perera who collected gratefully.

Shenal Sanders then missed a sitter when a free kick from Chamath Rashmitha was fumbled by the keeper and the rebound fell in to Sandesh. He managed to head wide to the agony of his team mates.

The break through finally came the Josephians way when Chalana Pramantha scored the goal of the tournament so far with a beauty of a shot. Beating Prakash Perera all ends up the ball flew into the right corner.

The Joe’s  played off the remainder of the match smartly to move to the Finals.