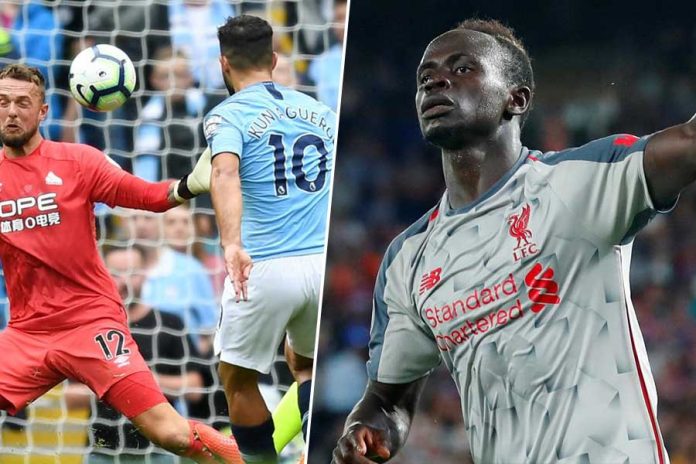 Tottenham Hotspur and Chelsea scored late in the game…

Manchester City took down Huddersfield 6-1 in a highly one-sided game at the Etihad Stadium.

David Silva, in his 250th appearance for the club, almost set up Sergio Aguero for the opener. A little while later the opening goal came from Sergio Aguero. The next goal was not far away as Gabriel Jesus slapped it at the near post making it two for the hosts.

A cross was fumbled by Ben Hamer and Aguero was on hand to finish it off. Close to the end of the first half Jon Gorenc Stankovic stopped the goal streak of City with his quick pace to make it 3-1.

After half time, a breakaway Aguero was fouled and David Silva curled in the resulting free-kick into the goal. Aguero completed his hat-trick in the 76th minute taking advantage of a cross. To the dismay of Huddersfield the 6th goal came via an own goal from Terence Kongolo.

Romelu Lukaku’s header halved the deficit, but Pascal Gross restored Brighton’s two-goal lead with a penalty before the break. Paul Pogba got a goal back with a stoppage-time penalty but it was too late to prevent defeat.

The Reds, who finished 25 points behind champions Manchester City in fourth last season – were worthy 2-0 winners at Selhurst Park.

The game took a while to heat up, but in the space of a few minutes, one brilliant play on each side got things going.

First, Naby Keita found himself in trouble in Liverpool’s left-back position but produced a magnificent Cruyff turn to skip away and pinged a remarkable long ball over the top to Mohamed Salah. Last season’s goal machine uncharacteristically spoiled things by lobbing over the bar.

Then for Palace, Andros Townsend hit the bar with a flamboyantly dipping shot from around 30 yards out.

Seconds before half-time, Liverpool took the lead. Salah went down in a crowded area with a couple of Palace defenders in close attendance but seemed to stumble rather than be fouled. But it was enough for referee Michael Oliver to give the penalty, which Milner converted.

That makes it 47 Premier League games in which Milner has scored; remarkably, his team haven’t lost any of those games.

Palace pressed Liverpool hard in the second half, making sure Alisson was well tested. Liverpool reportedly spent some of training this week roughing up the Brazilian in preparation for a physical night, and it paid off. He dealt with everything that came his way like he’d been there for years.

As Palace attacked, the visitors had to rely on counter-attacks, and it was from one of them that Liverpool’s grip on the game tightened. Salah was sent dashing through only for Aaron Wan-Bissaka to clip his heels just outside the area. It was clumsy rather than malicious, but the red card was inevitable.

Palace kept going after that, but the points were sealed in injury time, as Liverpool cleared a corner and sent Mane streaking up the pitch, and he kept his balance to round the keeper and slot home.

Watford v Burnley saw the visitors, Watford win 3-1. Andre Gray scored in the 3rd minute before James Tarkowski equalized for Burnley three minutes later. Troy Deeney and Will Hughes scored in quick succession soon after half time to make it 3-1.