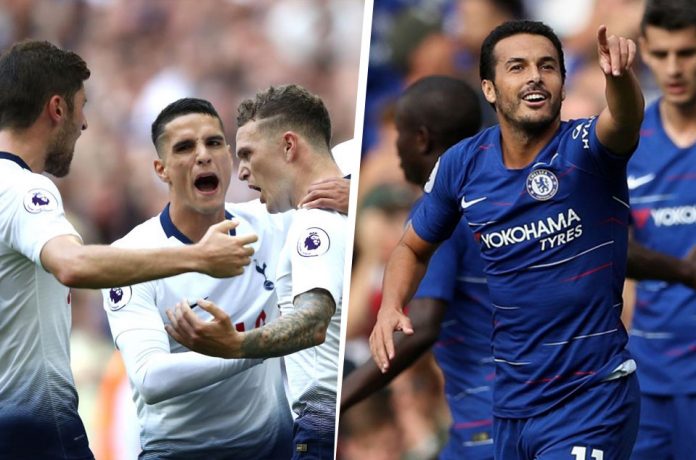 Tottenham Hotspur and Chelsea scored late in the game to defeat Fulham and Arsenal respectively in gameweek 2 of the Premier League.

Tottenham Hotspur marked their second win beating Fulham 3-1 at Wembley Stadium. The match started off with Spurs holding majority of the possession while Fulham struggled to get into the game.

Aboubakar Kamara took an early chance at the goal for Fulham which was easily picked off by the Spurs defenders and Christian Eriksen had his free-kick stopped by Fabricio Ramírez with a fine save.

Eriksen had another chance missed before Spurs took the lead after Lucas Moura scored a brilliant goal from a curling delivery.

Fulham got on level terms soon after half time as Aleksandar Mitrovic scored with a diving header. A brilliant free-kick from Kieran Trippier and Spurs took the lead again as he curled the ball below Fabricio into the bottom left corner.

Soon after Spurs was able to continue the streak with another goal in the 77th minute by Harry Kane. This goal was assisted by Erik Lamela.

This early London Derby at Stamford Bridge saw Chelsea deservingly earn 3 points over their rivals Arsenal in an enthralling 3-2 encounter.

Chelsea dominated the initial stages of play which kept the Arsenal defence on their toes. It only took Chelsea 9 minutes to open the scoring through Pedro. On the other end Arsenal missed a chance with Pierre-Emerick Aubameyang skiing, an Hector Belerin cutback, from point blank range.

Arsenal had to pay the ultimate price when Chelsea hit Arsenal on the counter which found Alvaro Morata who turned Shkodran Mustafi and slotted the ball past Petr Cech.

Arsenal were gifted with yet another chance to make amends when a lead up attack saw Alex Iwobi whip the ball in only for the unmarked Mkhitaryan to slash the ball over the crossbar.

Minutes later Henrikh Mkhitaryan was able to recover from his error when he shot from outside the box to reduce the deficit. Arsenal was able go into half time on level terms after Alex Iwobi turned in a Mkhitaryan cut-back.

The first real chance came when Pedro scraped a pass which created a direct shot for N’Golo Kante which was blocked by a sliding Sokratis.

A Chelsea set piece saw David Luiz’s free kick blocked by Cech while on the other end, a shot on goal by Aaron Ramsey deflected off the gloves of Kepa Arrizabalaga which Lacazette failed to take advantage of.

Eden Hazard neatly slipped a pass into the path of Marcos Alonso who coolly tucked it away through the legs of Cech to restore Chelsea’s lead and win.

Everton v Southampton saw Everton win 2-1 with Theo Walcott scoring in the 15th and Richarlison in the 31st. Danny Ings scored for Southampton in the 54th minute.

Leicester City v Wolverhampton Wanderers finished 2-0 in favour of the Foxes. Matt Doherty gave Leicester an own goal and James Maddison scored in the 45th minute. However, they lost Jamie Vardy in the 66th minute through a red card.

West Ham United v Bournemouth had Bournemouth come from a goal down to win 2-1. Marko Arnautovic scored a penalty in the 33rd minute for West Ham. Callum Wilson scored in the 60th minute and six minutes later Steve Cook scored the winner for Bournemouth.