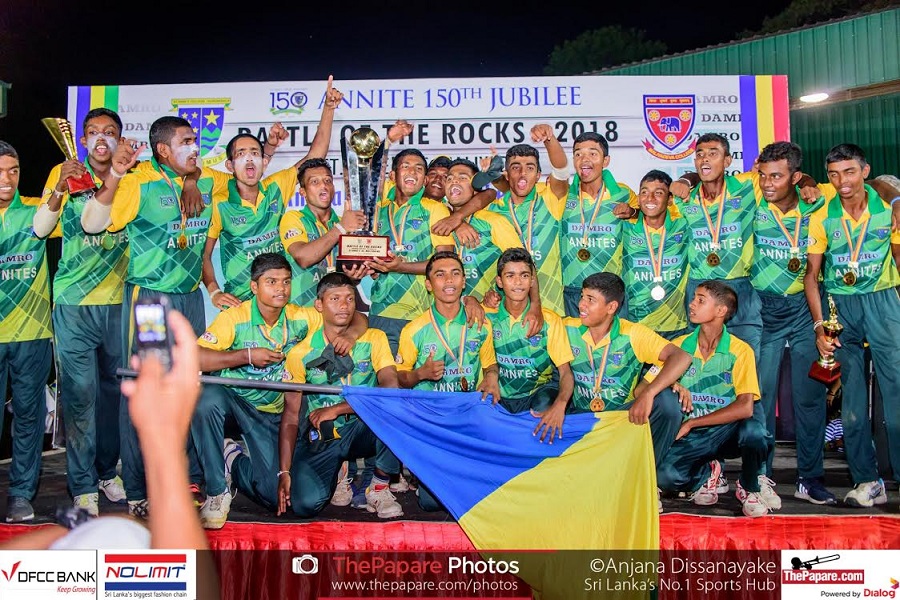 After being 132 for 3 in 32 overs chasing 208 runs, Maliyadeva College crumbled for 174 runs thanks to some brilliant bowling from Pasindu Tennakoon and Dananjaya Bandara who of St Anne’s which earned their team the victory by 33 runs in the 23rd Battle of the Rocks limited overs encounter at the Welgedara Stadium on Sunday.

Maliyadeva skipper Dulaj Ranatunga won the toss and elected to bat first. It was a placid surface which was on offer for the match but the Annites failed to capitalize early on in the innings. Dananjaya Bandara was the first to fall when the score was 21, caught behind to the bowling of Naveen Maduranga.

He was shortly followed by Pubudu Ganegama who was dismissed once again by Naveen who bowled a stunning spell of spin bowling to take the advantage early on. However, wicket keeper batsman Dineth Chandimal looked solid on the other end as he stroked a quick fire 31 at the top.

St Anne’s were feeling the heat but it was the experienced pair of Wanitha Wanninayaka and Kavindu Ranasinghe who put together 87 runs for the 4th wicket. Wanitha missed out on a well deserved half century but Kavindu went onto make top score with 54 runs which included 2 boundaries and 1 maximum.

he Annites were looking good to post a total over 250 runs but a cluster of wickets from Pasindu Tennakoon of Maliyadeva put on the breaks on the run flow. However a smart cameo from Lasith Warnakulasuriya took St Anne’s to a respectable total of 207 runs.

In reply, Maliyadeva College got off to a blistering start with an opening stand of 57 off just 70 deliveries. Supun Sumanarathna and Chaluka Athapattu played fearless cricket but a miss communication between the two led to a run out which got rid of Supun.

Pasindu then dismissed Chaluka for 29 and the momentum shifted towards the Annites. With a lot of responsibility and pressure on his shoulders, the Maliyadeva skipper walked on to the crease. Together with Muditha Premadasa, he steadied the ship took the upper hand with a 70 runs stand for the 3rd wicket.

Dulaj Ranathunga  played a gem of a knock for his side, his innings of 51 had 5 boundaries and one maximum. The way he handled the pressure and built up his innings was a treat to watch. After his fall for the bowling of Pubudu Ganegama, the Annites found new life. Pubudu went on to dismiss Muditha for 22, two over later which put Maliyadeva to 141 for 3 in 33. Overs.

The double blow from Pubudu turned the match on its head and then Pasindu and Dhanjaya Bandara took control of the game to clean up the tail. The last five wickets fell for just 1 run as Pasindu and Dhananjaya secured the win for St Anne’s College by 33 runs.