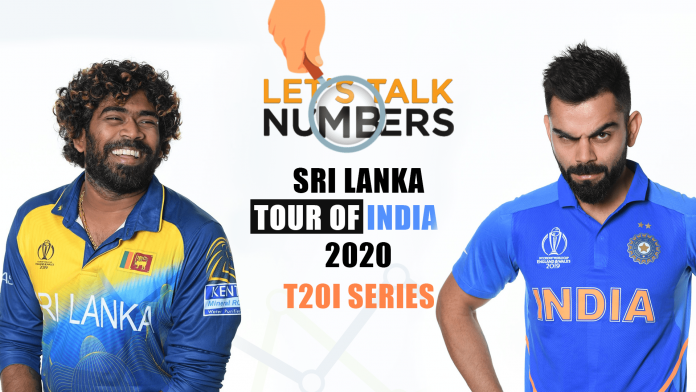 The Indo-Sri Lanka cricket rivalry is about to renew as Sri Lanka ready to face the hosts India in a 3-match T20I series which will provide much needed preparation for both teams ahead of the ICC T20 World Cup. Let’s take a closer look at the T20I numbers between these two sides.

The neighbouring countries met in T20Is for the first time (in India) in 2009 at Nagpur when Sri Lankan skipper Kumar Sangakkara manufactured a masterpiece of an innings (78 runs from 37 deliveries) to guide the visitors to a 29-run victory against the MS Dhoni-led India. The series was drawn as India fought back in the 2nd T20I thanks to the big hitting of Yuvraj Singh.

Apart from the first meeting, Sri Lanka have been able to defeat India in a bilateral series only one other time: Pune, 2016.

Sri Lanka have had the upper hand in ICC World T20s vs India. Both T20Is they’ve played against them will have a special place in any Sri Lanka Cricket fan’s heart where we saw Chamara Kapugedara’s last ball six sent India out of the World T20 in 2010 and other game being the final of the 2014 World T20.

The 2018 Nidahas Trophy opener was the last time Sri Lanka beat India in a T20I, when Kusal Perera tuned into beast mode, chasing 174 at Khettarama.

The last decade belongs almost entirely to India as they have dominated Sri Lanka in every bilateral series so far. Sri Lanka is yet to win a T20I series against India.

Since their first Test in India in 2009, Sri Lanka have played 8 T20Is and managed to win only 2 T20Is there. The last time Sri Lanka played in India, they were humiliated 3-0 by Rohit Sharma and Co.

Sri Lanka will play their first T20I in Barsapara Cricket Stadium, Guwahati which has only hosted 1 T20I so far where Australia registered an 8 wicket win against the hosts in 2017.

The Lankans experienced a disastrous outing in Indore the last time they were there as they lost by 88 runs. India accumulated their highest T20I score to date as Rohit Sharma went on with his usual business, scoring a cracking century in just 43 balls.

Out of Sri Lanka’s only 2 wins in India, one came at the Maharashtra Cricket Association Stadium, Pune as Dasun Shanaka and Kasun Rajitha ran through the strong Indian batting order to dismiss them for 101.