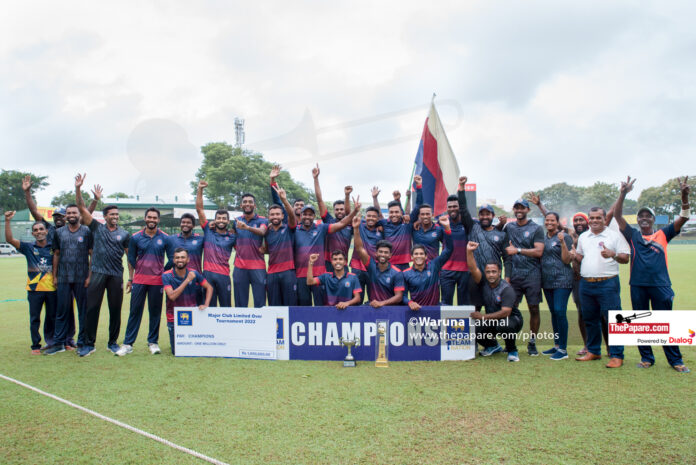 Tamil Union Cricket & Athletic Club were crowned champions of the SLC Major Clubs Limited Overs Tournament as they defeated Army Sports Club by 7 wickets (D/L) in the final of the tournament, which was worked off today (02nd) at SSC Grounds in Colombo.

Army Sports Club’s Skipper Thisara Perera won the toss and opted to bat first. Ashan Randika by 1and Seekkuge Prasanna opened the innings for the soldiers, but the duo could not give them a good start, as both lost their wickets inside first 4 fours for just 13 runs.

The Army batters continued to struggle with the bat as they lost 6 wickets for 84 runs, putting huge pressure on the tail-enders. However, Sri Lanka cap Asela Gunaratne and wicket-keeper batter Mahesh Kumara showed some resistance with the bat, building a 74-run partnership for the 7th wicket.

Both players stroked half-centuries as Army CC posted 198 runs in 49.5 overs. The seamers Santhush Gunathilake and Isuru Udana starred with the ball for Tamil , picking up 3 wickets each.

Due to rain interruption, the target was revised as 153 runs in 37 overs for Tamil Union to chase down. Tamil Union batters never looked troubled in the run-chase as they crossed over the line comprehensively in the 32nd over with 7 wickets in hand.

The wicket-keeper batter Sadeera Samarawickrama played a match-winning knock of 58 runs off 70 balls with 4 fours, while Dilruwan Perera (37) and Navod Paranavithana (32) chipped in with useful contributions with the bat for Tamil Union.