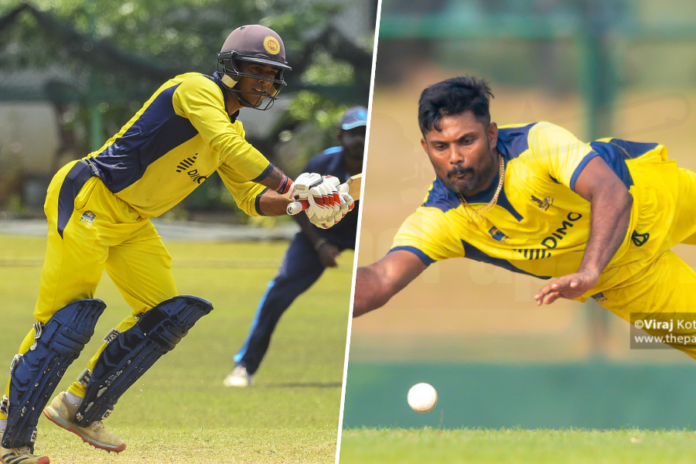 Four encounters in the SLC Major Club Limited Over Tournament worked off today at several venues across the island. Navy SC, Ragama CC, Army CC registered victories in their respective encounters, while the game between NCC and Negombo CC ended in a tie.

Navy SC defeated Kandy Customs SC by 24 runs in their Group A encounter worked off today at Navy Grounds in Welisara.

After winning the toss, Navy SC opted to bat first, but managed to post a modest total of 197 at the end of allotted 50 overs. Thushara Samarakoon stamped his authority with the bat scoring 50 runs off 83 balls for the sailors. The off-spinner Ravindra Karunaratne bowled a clever spell for Kandy Customs, registering impressive figures of 4 for 30 in his 9-over spell.

Kandy Customs could post only 173 runs on the board as the 28-year old off spinner Pasindu Madushan’s scintillating bowling display slipped them to a 24-run defeat. Chanaka Wijesinghe played a useful knock with the bat, scoring 58 runs off 91 balls, but it was not enough to propel the Kandy boys to victory.

The Group A encounter between NCC and Negombo CC witnessed a thrilling finish as the match ended in a tie at Marians Cricket Grounds in Katunayake.

After been put into bat first, a strong NCC batting lineup accumulated only 195 runs on the board with the right-hand batter Hasith Boyagoda top-scoring with 43 runs. The 22-year old left arm spinner Pasindu Hettige made his presence felt with the ball, snaring a 5-wicket haul for Negombo CC.

The lads from Negombo got off to a great start with the bat in their pursuit of target, putting 64 runs for the opening wicket, but they lost their way in the middle as many batsmen could not convert their starts into a significant score.

As a result, the match was ended in a tie and the points were shared between the two sides. Yugeesha Dilshan and Chathuranga De Silva kept the lid on the coring rate on the opposition, picking up 3 wickets each.

The Group B encounter between Saracens SC and Ragama CC also ended in a thrilling finish as the latter registered a 1-wicket win in a close fought game at Surrey Village Grounds in Maggona.

The rain-hit encounter was reduced to a 42-over affair where Saracens won the toss and chose to bat first. They mustered 162 runs in the allotted 42 overs, with Promod Maduwantha being the cornerstone of their batting unit scoring 46 runs. The right arm fast medium bowlers Janith Liyanage (3/27) and Ishan Jayaratne (2/27) impressed with the ball sharing 5 wickets among them.

Chasing 163 to win, Ragama CC got off to a decent start with the bat but Saracens bowlers managed to strike at crucial junctures to keep their team in the course. However, a 45-run stand between Janith Liyanage (27) and Supeshala Jayathilaka (22) for the fifth wicket ensured Ragama CC crossed the mark at the end though they lost quick wickets afterwards.

Army CC registered a comprehensive 7-wicket win over Lankan CC in their Group A encounter worked off today at SLAOC International Cricket Stadium in Dombagoda.

Due to the prevailing weather conditions, the match was reduced to a 45-over contest in which Lankan CC were asked to bat first on a tricky wicket. The experienced bowling lineup led by Seekkuge Prasanna (3/22) and Asela Gunarathne (2/24) managed to restrict the opposition for a well below par score of 128 runs.

Army CC hunted down the target with ease in the 25th over, losing only 3 wickets. The 25-year-old left-hand batter Himasha Liyanage was the mainstay of soldiers’ run chase as he stroked an unbeaten 55 runs off 62 balls with 5 fours and a six.