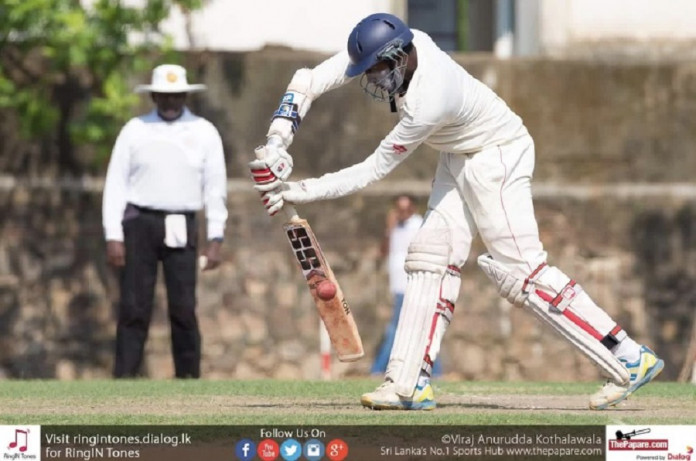 The 112th Lovers’ Quarrel between Mahinda College and Richmond College got underway at the Galle International Cricket Stadium today(17).

Mahinda College won the toss on a placid batting surface and surprisingly put their opponents into bat. They backed up their decision brilliantly as their bowlers bowled good lines and lengths to keep the strong Richmond batting line up in check right throughout their innings.

It was a collective effort from all the bowlers as Kalindu Edirisinghe, Nipun Malinga and Kavindu Ediriweera captured two wickets apiece while their fielders backed up the bowlers brilliantly.

Some of Richmond College batsmen got starts but none of them capitalized on their starts as we saw as many as four batsmen being dismissed in the 30’s. Avindu Theekshana, Kavisha Abishek, Dhananjaya Lakshan and Kamindu Mendis were the culprits who threw their wickets away after looking well set for big ones.

Mahinda College in reply, used a very defensive approach as they batted for 46 overs scoring at just over two runs per over. They were on 96 runs for the loss of three wickets when stumps were drawn on day one.

Vinura Hiranjith showed good resilience as he battled his way to remain unbeaten on 25* for Mahinda College. Navod Paranawithana also chipped in with 20 while Sandun Mendis was the most successful bowler for Richmond capturing two wickets.