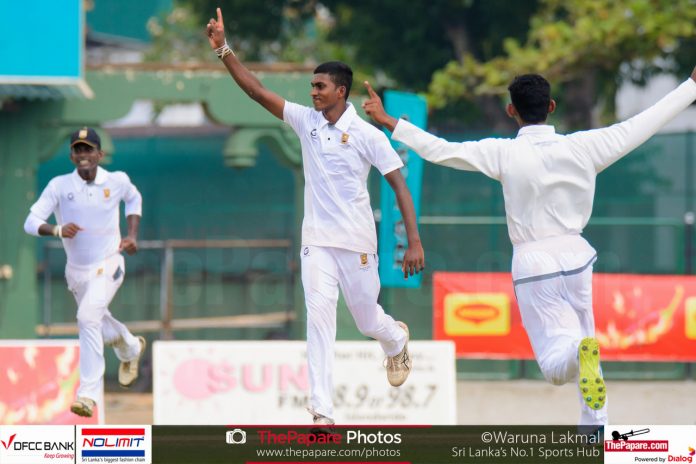 Mahanama College were 83 for 3 in their first innings at stumps on day 1 after bundling out their arch rivals, DS Senanayake College for just 156 runs in the 12th Battle of the Golds at the P. Sara Oval on Friday.

DS Senanayake College captain Vihan Gunasekara won the toss and elected to bat first. Mahanama bowlers were on a roll, getting a cluster of wickets with skipper Heshan Hettiarachchi getting a hat-trick off his second over. First to fall was Abishek Liyanarachchi who was caught behind and then he was followed by Pasindu Adithya and Sachintha Hettige who was caught plumb in front.

It did not stop there as the opening batsman Chamath Yatawara ran himself out after surviving the initial burst from the seamers and it was once again the skipper Heshan who affected the run out. In the next over matters got worse when Heshan struck for the fourth time which put DSS in deep trouble at 11 for 5.

With 5 already back in the hut it was looking ominous for the Dons. In desperate need of some consolidation it was up to Vihan Gunasekara and Shenal Chandrasena to resurrect their innings. The pair hung on and slowly but steadily chipped away with the runs. They managed to add 79 before Vihan was dismissed for a well made 45.

Chandrasena went on to reach his half century which included 7 boundaries. DSS lower middle order did the bulk of the scoring and thanks to a few cameos down the order they managed to post 156 all out for their 1st innings.

In reply, Mahanama lost their opener Bishan Mendis, who edged one off Pasindu in the first over . Pawantha who joined Pathum managed to see off the new ball and they added 62 runs for the 2nd wicket. Pawantha made a quick fire 31 which included 6 boundaries.

Mahanama managed to strike twice late in the day but an unbeaten knock of 39 from Boteju put his team in a strong position going into the 2nd day.