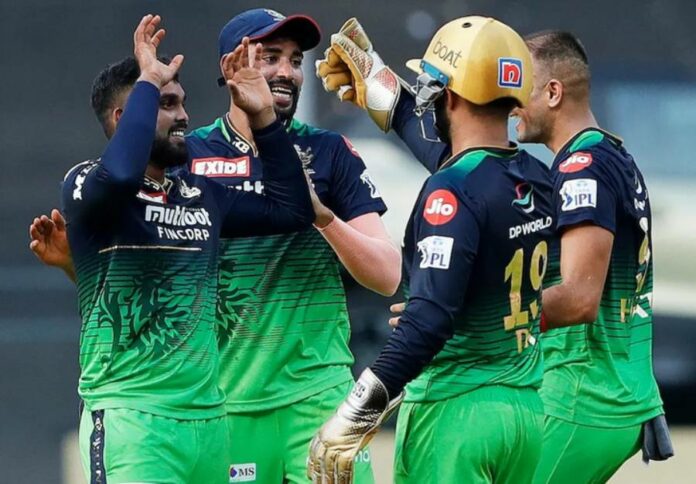 The Royal Challengers Bangalore (RCB) registered their 7th victory in the TATA Indian Premier League (IPL) 2022 after defeating Sunrisers Hyderabad (SRH) by 67 runs on Sunday at the Wankhede Stadium in Mumbai.

A splendid captain’s knock by Faf du Plessis (73*) propelled RCB to 192-3 in the first innings before Wanindu Hasaranga’s outstanding fifer guided the team to a comprehensive victory.

Aiden Markram and Rahul Tripathi counter-attacked and led the recovery as SRH were 39-2 at the end of the powerplay. The fifty partnership was up for the third wicket after Tripathi got a reprieve in the 8th over.

Hasaranga struck immediately after Markram was caught at deep mid-wicket by Kohli. Tripathi added two fours and SRH were 69/3 at the halfway stage.

Nicholas Pooran smacked two fours and a six before the left-handed batter miscued a shot and was caught off Hasaranga’s bowling.

Tripathi reached his half-century at the other end with a maximum. The SRH opener was given a reprieve but RCB picked their 5th wicket after Suchith was stumped off Hasaranga’s bowling.

Josh Hazlewood scalped two wickets on consecutive deliveries including the big wicket of Tripathi, who was dismissed on 58. Hasaranga claimed a five-wicket haul after getting the wickets of Shashank Singh and Umran Malik in the same over.

Earlier, RCB, who elected to bat first, remained unchanged from their previous game. SRH got off to a perfect start with the ball after Jagadeesha Suchith dismissed Virat Kohli on the first ball of the match.

RCB recovered well after an early wicket and moved to 47-1 at the end of powerplay. Both Rajat Patidar and Faf du Plessis were up and running with 2 fours and a six each.

The fifty partnership was up for the duo. 20 runs came off Umran Malik’s first over after du Plessis smacked two fours and a six.

Rajat Patidar got a reprieve and RCB were 93-1 at the halfway stage. Skipper du Plessis reached his half-century in the 12th over and the hundred partnership was up for the second wicket.

Suchith claimed his second wicket and put an end to the partnership after Patidar was caught at deep mid-wicket.

New batter, Glenn Maxwell added two fours and a six including his trademark switch-hit. RCB were 125/2 with five overs to go. Maxwell hammered his second six straight down the ground off Bhuvneshwar Kumar’s bowling.

The 150 was up for RCB after du Plessis and Maxwell hit a four each in the 18th over. The fifty partnership was up for the third wicket before Maxwell holed out to the deep off Kartik Tyagi’s bowling.

Dinesh Karthik provided an excellent finishing touch after whacking four sixes and a four which helped RCB post 192/3 in the first innings.