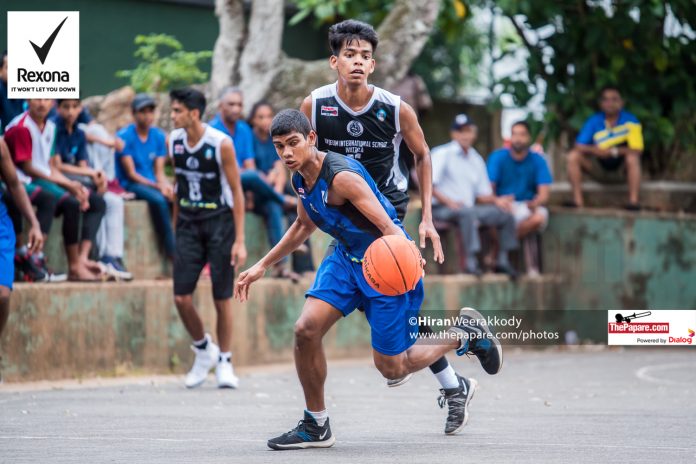 Zahira College and Lyceum International School Wattala emerged winners on Day 03 of the Group B stage at The Papare Basketball Championships 2018.

Royal and Lyceum Nugegoda record back to back wins

ThePapare Basketball Championship 2018 (TPBC18), continued its boys’ preliminary stages with the matches in Group “A” being…

Two novice teams, Zahira College and De La Salle College went into a back-to-back battle. Zahira took control of possession over the first quarter with strong attacks dominated by Ashir at number 10. The De la Salle players struggled with the basic passes missing out on their counterparts within the perimeter. Strong defence by Zahira allowed no room for rebounds for their opponents. De La Salle College had scored in the final few seconds of the first half but failed to catch up with Zahira College, leading 10-25 at half time.

Even though both teams shared a fair amount of mistakes Zahira summed up more attempts in their favour. Zahira rushed in a strong attack with Asthak and Maajid attempting steady shots under the basket flinging over the defence. Malshan from De La Salle worked out baskets for his team throughout the game but didnt finish off as expected. Zahira took home a 30 point victory at 49 to 19.

Lyceum took possession of the game but gave in very easily to the home team. S. Thomas’ College had full control over the first ten minutes of the game dominating with 23 – 3. Lyceum lagged back drastically only managing to hold up by converting free throws. The change of pace and the game plan in Lyceum Wattala with the outbreak of the second quarter shocked the opponents. However the Thomian Skipper Yasiru Bimantha added on some points to the home score. The first half ended with S. Thomas’ College in the lead 28 – 14.

The real pressure struck when Lyceum Wattala took control of the game in the second half. S. Thomas’ got only a very few chances to the basket while the possession was maintained within the Lyceum perimeter. Taking the maximum use of the lack of rebounds and missed out passes, the defence circuit from S. Thomas’ College kept adding on a few scores with more free throws than before. There was hope for Lyceum International School Wattala up until the final few seconds of the game which had both teams on pins with a 3 point margin. S. Thomas’ College manage to squeeze another win and topped Group B with 49 – 46.