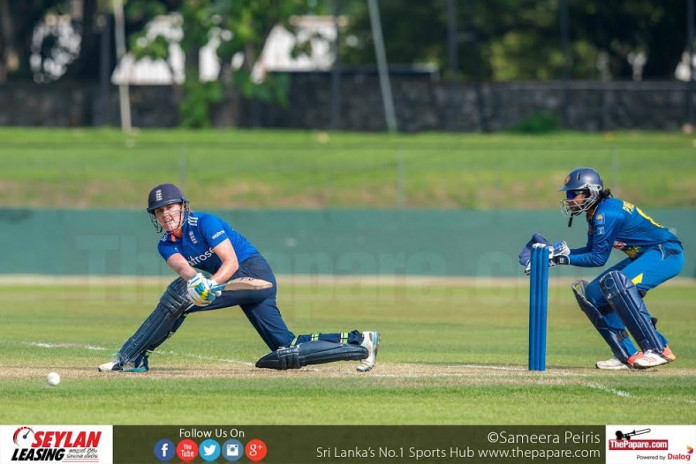 The England women got their tour of Sri Lanka off to a great start as they beat the hosts by 8 wickets in the 1st ODI at the Sinhalese Sports Club earlier today. Sri Lanka managed just 168/7 in their 50 overs and England made short work of the chase with Natalie Sciver top-scoring with 47.

The hosts won the toss and Inoka Ranaweera, in her 1st game as skipper, opted to take 1st lease of a dry SSC track. Openers Hasini Perera and Nipuni Hansika got the team off to a steady start, putting on a half century partnership. However, Perera fell right after the milestone was reached, giving England a way into the game. Hansika followed soon after as Sri Lanka went from a position of strength to a spot of bother at 56/2.

In what seems like characteristic fashion, the Lankan innings never really got going although the top 7 batters all got to double figures. Dilani Manodara was the top scorer as she made 27 while Perera and Hansika both made 26.

Lauren Winfield and Tammy Beaumont got the visitors got off to a flyer as they raced to 50 in the 8th over of the innings. Chamari Atapattu drew 1st blood for Sri Lanka with the ball by dismissing Winfield and Beaumont followed soon after but the hosts could not capitalize on the opening as Captain Heather Knight and Natalie Sciver put on 82* to seal the game.

The next game between the two teams will be on the 12th of November, which will incidentally be the 1st of 3 Women’s Championship ODIs.