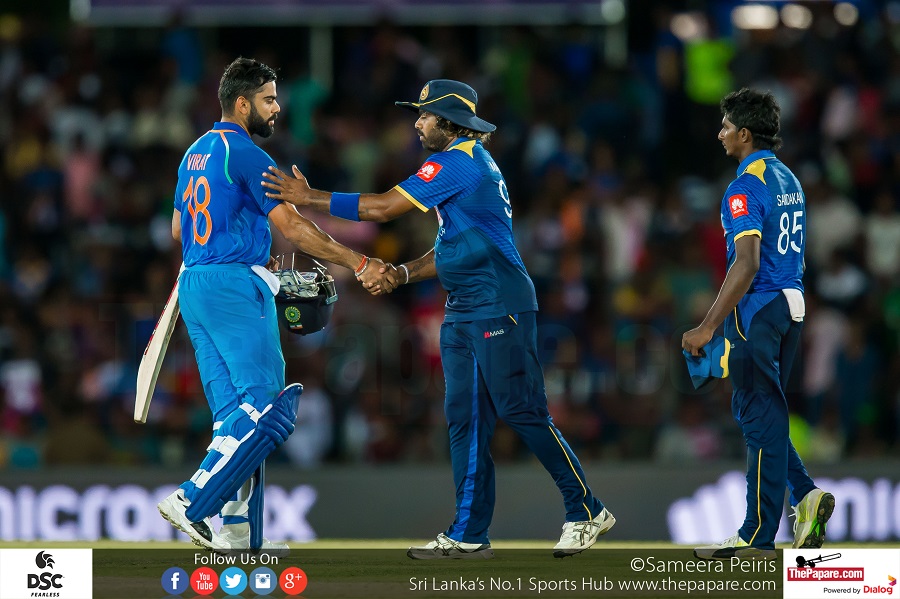 Shikar Dhawan and Virat Kohli put on 197 runs for the 2nd wicket as India cruised to a 9 wicket win over Sri Lanka in the 1st ODI at the Rangiri Dambulla International Stadium earlier today.

Chasing 217 to gain a 1-0 lead in the 5 match ODI series, the Indian batsmen looked untroubled by the toothless Sri Lankan bowling attack and ultimately cantered home with more than 20 overs to spare. Dhawan, who has already made 3 centuries on tour, including this one, finished on 132* while Kohli made 82*.

Batting first, Sri Lanka went from 139/1 in 24 overs to 216 all-out in 43.2 overs as the middle order crumbled, despite being given a solid platform to launch from by Niroshan Dickwella, Kusal Mendis and Danushka Gunathilake.

Niroshan Dickwella’s 64 was the only bright spot in yet another dismal performance by the Sri Lankan batting line-up against the Indians. Coming into the game the hosts were quite confident after unexpectedly defeating the Indians the last time the teams met in ODI cricket, at the ICC Champions Trophy in June. However, their confidence no doubt took a hit when Indian skipper Virat Kohli won the toss and decided to put the Sri Lankans in to bat.

Dickwella and opening partner Gunathilake continued their rich vein of form at the top of the innings, putting on 74 runs for the 1st wicket. The pair had a few moments of confusion while running between the wickets but otherwise looked comfortable in the middle. Gunathilake went playing a reverse sweep as Yuzvendra Chahal made the much-needed breakthrough for the visitors.

Dickwella went to his half ton in 65 balls but was struck right in front a few overs later by the man with the golden arm, Kedar Jadhav. India managed wickets in quick succession from then on as none of the batsmen outside the top 5 got to double figures.

Angelo Mathews batted on, trying to get Sri Lanka to a respectable score but the unnecessary run-out of Chamara Kapugedara and poor shots by all-rounders Wanindu Hasaranga and Thisara Perera left him stranded on 36 at the end of the innings.

For India, opening bowlers Bhuvaneshwar Kumar and Hardik Pandya were the only 2 who could not pick up any wickets as Axar patel picked up three alongside Jadhav, Bumrah and Chahal who claimed 2 wickets a piece.

With a below par target on hand, Rohit Sharma and Dhawan began things brightly for India. Sharma was run out in unfortunate circumstances, as his bat stuck in the ground and although he was well past the crease, with his body being in the air when Chamara Kapugedara’s throw hit the stumps, he was given out.

Sri Lanka did produce a couple of chances, with catches going down off the bowling of both Lasith Malinga and debutant Vishwa Fernando.

If this game is anything to go by, the hosts face an uphill task in registering the two wins they need to gain automatic qualification to the 2019 World Cup. 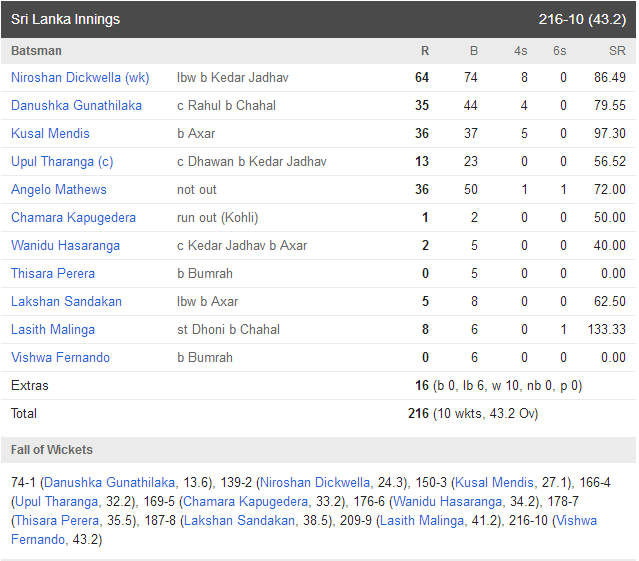 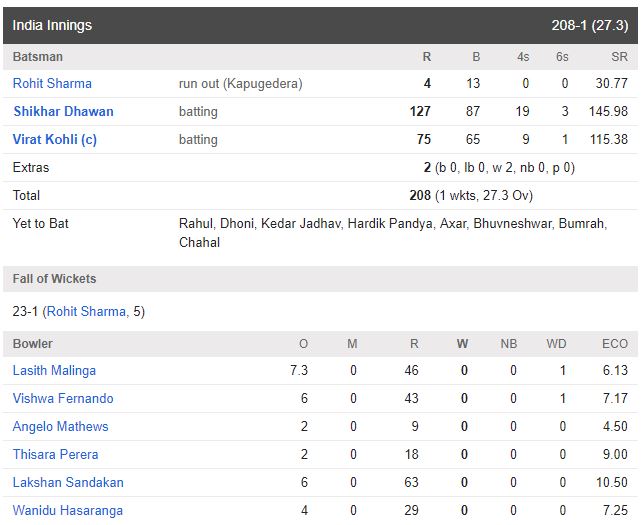