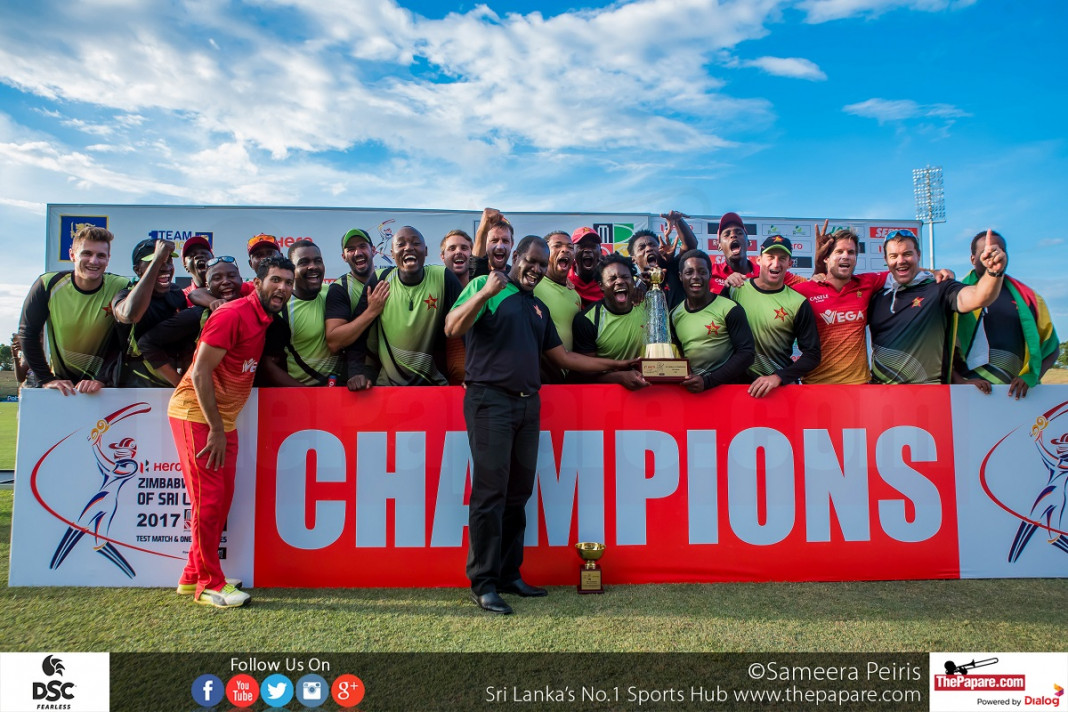 Sri Lanka suffered their worst ever ODI series defeat when Zimbabwe completed a 3-2 victory winning the fifth and final game by 3 wickets in Sooriyawewa, Hambanthota.

Despite Akila Dananjaya’s four-wicket haul which inspired Sri Lanka’s brilliant fight back with the ball, Hamilton Masakadza hit an 86-ball 73 as wobbly Zimbabwe chased down the hosts’ lowest first-innings score against their opponents at home, 203 to register their first-ever ODI series against the islanders.

With chasing teams winning all the matches thus far in the series, Zimbabwe opted to bowl first on the pitch which was also used for the 3rd ODI. Off-spinner Sikandar Raza who opened the bowling registered his best ODI figures, 3 for 21 and skipper Graeme Cremer took 2 for 23 off his 10 overs to scythe through the Lankan batting lineup despite Asela Gunaratne’s sensible and unbeaten 59* off 81 balls with 4 fours.

The playing surface offered plenty of spin as Sri Lanka halted Zimbabwe’s chase picking up 6 wickets for 38 runs in the middle but Raza did his part with the bat as well scoring a run-a-ball 27 and finished off with a six.

After setting up a world record of two consecutive 200+ opening stands in the previous matches, Dickwella and Gunathilaka failed to deliver when the former was caught behind off Tendai Chatara in the 2nd over of the match.

I am under massive pressure as captain – Mathews

Kusal Mendis posted his third low score in the series when he came down the track and chipped Raza straight to mid-wicket with the score on 13. Sri Lanka fell into deep trouble in the 9th over when Raza bowled a peach of a delivery to take the off-stump catching in-form Tharanga completely at sea as the hosts were 31 for 3.

Skipper Angelo Mathews started off shakily but managed to add 47 runs for the 4th wicket along with Gunathilaka but his counterpart Cremer deceived Mathews with a lovely delivery which took the outside edge, pouched nice and low onto his right by Hamilton Masakadza at first slip.

Gunathilaka scored all his 5 boundaries off the seamers and reached his 7th fifty in 75 balls, a patient and responsible knock under the circumstances before being trapped LBW by left-arm spinner Sean Williams.

Wanindu Hasaranga became Raza’s third victim, pulling straight to mid-wicket where skipper Cremer took a brilliant diving catch. Nuwan Kulasekara castled himself by not reading a googly off Cremer while Akila Dananjaya who replaced Lakshan Sandakan in the team was sent back to the pavilion courtesy a stunning, one-handed catch by Tarisai Musakanda at cover-point.

After being 153 for 8, Gunaratne and Dushmantha Chameera added the highest 9th wicket partnership for Sri Lanka against Zimbabwe and the best stand in the innings, 50 off 53 balls to give some hope for the hosts.

Masakadza and Solomon Mire once again gave a blistering start to the visitors scoring 92 before the first 15 overs. Mire thrashed Nuwan Kulasekara for 18 runs and continued to smash the Lankan bowling before being castled around the legs off Asela Gunaratne. Masakadza continued his excellent form to reach the 5000-run mark and set up the chase for the visitors before Kulasekara leaped above his head and took a stunning catch at mid-off to give Malinga’s first wicket.

Sri Lanka sensed an opportunity when Craig Ervine was caught plumb in front by Dananjaya but was turned down by umpire yet skipper Mathews challenged the decision and got it reversed through DRS. Sean Williams looped to short extra-cover after playing against the spin as Dananjaya revived Sri Lanka’s chances.

Tarisai Musakanda grew impatient as he came down the track and whacked Dananjaya straight to long-on and Malcolm Waller was sent back courtesy a brilliant return catch by Malinga. Dananjaya ended his impressive spell with the wicket of Peter Moor who was caught sharply at leg-slip by Mendis. Zimbabwe had suddenly lost 6 wickets for 38 runs but Raza kept his nerve along with skipper Cremer to take Zimbabwe to a historical win.