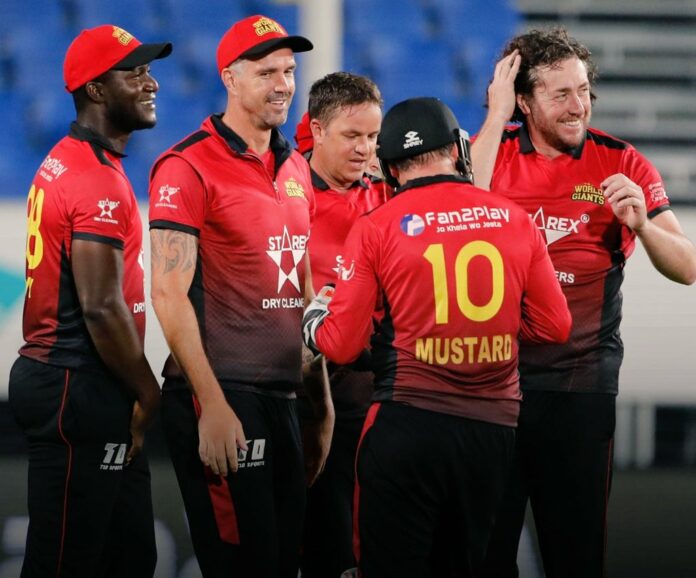 Asia Lions’ skipper Misbah-ul-Haq won the toss and chose to bowl first with making two changes to their playing from last game as they brought in Mohammad Yousuf and Shoaib Akhtar in place of Romesh Kaluwitharana and Dilhara Fernando.

On the other hand, World Giants had also come up with two changes to their playing XI bringing in Corey Anderson and Brad Haddin replacing Herschelle Gibbs and Jonty Rodes.

World Giants got off to a great start with the bat as the openers Kevin Pietersen and Phil Mustard put on a brisk 51-run partnership for the first wicket in 4 overs before former Sri Lankan seamer Nuwan Kulasekara struck with the ball.

Lions managed to pull things back as Sri Lankan seamers Kulasekara and Vaas picked up 2 quick wickets putting some pressure on Giants. But former New Zealand batter Corey Anderson coming to bat at 4, changed the complexion of the game smashing a blistering knock of 94 runs off 43 balls with 7 fours and 8 sixes.

Brad Haddin (37) and Daren Sammy (38) also gave impetus to the innings with two cameos as World Giants posted a massive 256 runs in the allotted 20 overs. Kulasekara was the pick of the bowers for Lions as he snared 3 scalps for 45 runs.

Chasing 257 to win, Lions’ opening pair TM Dilshan and Sanath Jayasuriya got them off to a great start adding 57 runs for the first wicket in 5.3 overs. After their dismissals, Lions were pushed onto the backfoot by Giants bowlers in post powerplay session.

Upul Tharanga (25), Asghar Afghan (24) and Mohammad Yousuf (39*) tried their best to pull the Lions over the line with vital cameos with the bat but they fell short of 25 runs of the target as World Giants emerged winners of the inaugural Legends League Cricket tournament.