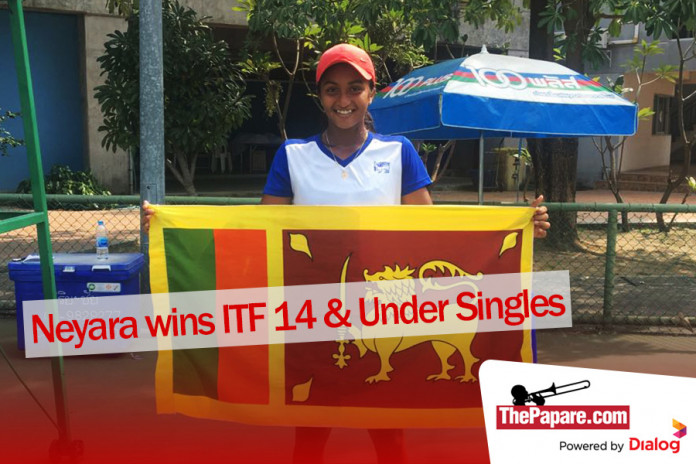 Sri Lanka’s Neyara Weerawansa did her country proud when she won the Girls’ Singles of the ITF Asia 14 & Under Championship Division II in Thailand defeating Maria Breidy of Lebanon in the finals.

A team of six players consisting of three girls and three boys left the country for the championship in Thailand last week along with coach Pahirathan Tharmakularaja and Sri Lanka should be contempt with their progress in the first week.

Progressing forward in the Girls’ Singles draw, Neyara Weerawansa got her ticket to the finals defeating Prerana Koirala of Nepal 6/7 (2) & 6/2. In the finals, she defeated the Lebanese national Breidy straight sets 6-3, 6-1.

In a prospect of player development and enhancement of skills, a six-member Sri Lankan team took wing to Thailand for the ITF Under 14 Development Championship.

It was a double title for the Sri Lankans in the first week when Neyara Weerawansa teamed up with Anjalika Kurera to beat Abhilasha Bista of Nepal and Oshini Herath of Sri Lanka. The scores of the match read 6/3, 7/6 (3).

It was a successful week for the girls winning the Girls Singles title, the doubles title and with a Sri Lankan player ending up in the runner-up position in the doubles.

The junior boys had the luck of making it only till the semifinals with Pesanjith Kannangara and Nelaka Dissanayake losing to Taym Alazmeh of Syria and Abdellah Shelbayah of Jordon respectively.

The second week of the junior series commences today.