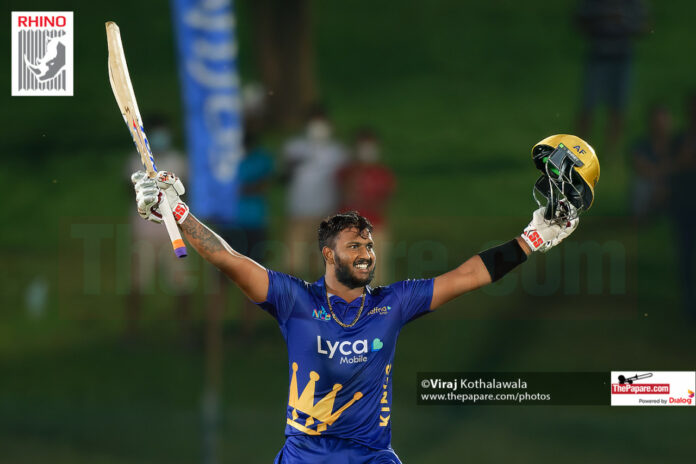 With this win, Jaffna Kings qualified for the Final on 23rd December, where they will take on Galle Gladitors – a repeat of the 2020 final.

After being sent into bat, Jaffna Kings amassed 210 for 4 from their 20 overs. Fernando, who struck a brilliant 100 off 64 balls – the first three-figure individual score in LPL 2021, added a brilliant 122-run opening stand with Rahmanullah Gurbaz to set the tone. In reply, Dambulla Giants were never in the hunt despite a valiant, unbeaten 75 from Chamika Karunaratne as they were restricted to 187 for 9 at the end.

Fernando and Gurbaz added 92 runs in the first 10 overs as Dambulla bowlers had no answer to their onslaught. During their partnership, Gurbaz was the aggressor, scoring 70 runs off 40 deliveries with 5 fours and 4 sixes. He fell in the 14th over and from then, Fernando took on the mantle of punishing some hapless bowling by the Dambulla Giants.

Fernando was ably supported by the middle order batters such as Tom Kohler-Cadmore and Thisara Perera but his blistering knock ensured Jaffna posted a match-winning score. Fernando reached his hundred in the 20th over and fell soon after getting to the milestone.

Chasing 211 runs to book their place in the Finals, Dambulla Giants lost wickets at regular intervals as the young West Indian Jayden Seales picked up 3 wickets for Jaffna Kings to curtail the Dambulla chase to 96 for 7 in the 12th over. Some batters got starts but failed to convert it big as Jaffna bowlers tightened the screws well.

However, Karunaratne, who had a horror day with the ball, tried to make a game out of nothing, scoring a blitzkrieg 75 off 47 balls with 10 fours and 2 sixes to get closer to the target but the result was inevitable.

Apart from Seales’ three-wicket haul, Maheesh Theekshana and Thisara Perera picked up 2 wickets apiece. Whilst Theekshana was economical, giving away only 23 runs, Perera leaked 50 runs off his 4 overs. Jaffna Kings, the reigning champions, will look to defend their title on Thursday night against the Galle Gladiators outfit, against whom they have lost all 3 of their matches this season.