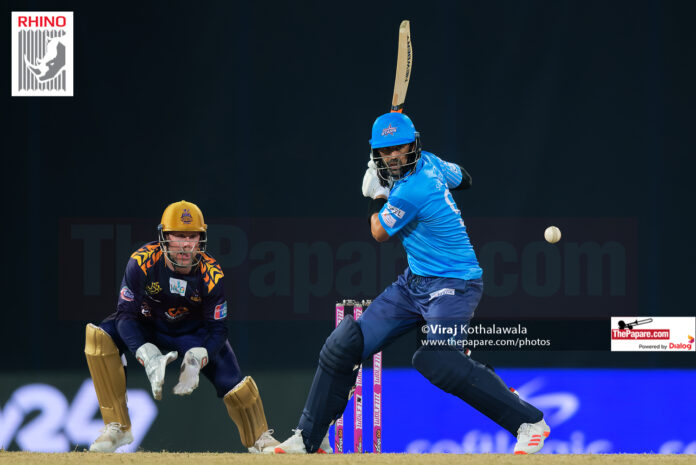 David Wiese struck 22 off 16, to help the Colombo Stars to a nervy 4-wicket win over the Galle Gladiators in Match 3 of the Lanka Premier League.

When Wiese came in to bat, the Stars were in a spot of bother at 72/5 needing 45 off 8 overs. He took a few deliveries to get going, but took on the leg-spin of Pulina Tharanga in the 15th over of the chase, smashing 2 sixes and the equation from 37 off 36 to 21 off 30.

From that point it was pretty straightforward for the Stars, even though Wiese was dismissed by Tharanga in the next over. Dinesh Chandimal stuck around till the end and hit 2 boundaries off Nuwan Thushara to finish things.

Earlier in the day, Dhananjaya De Silva, stepping in as captain for the injured Angelo Mathews, started off with 2 maidens on one end, opening the bowling for the stars. Add to it, he got the prized wicket of Danushka Gunathilake in that spell, ensuring that the Gladiators did not get off to a quick start.

On the other end, Chameera picked up Kusal Mendis, reducing the Gladiators to 2/6. He could have had 2 in that over, as he hit Mohammed Hafeez right in front of the stumps, but the Stars didn’t review the umpire’s not out call.

It didn’t matter too much as Hafeez was dismissed not too long after by David Wiese with his 1st delivery in the LPL.

Ben Dunk tried to get going in the middle overs but didn’t get much support, before Isuru Udana clattered 2 sixes late in the innings to take the Gladiators up to 116/8 at the end of their 20 overs.