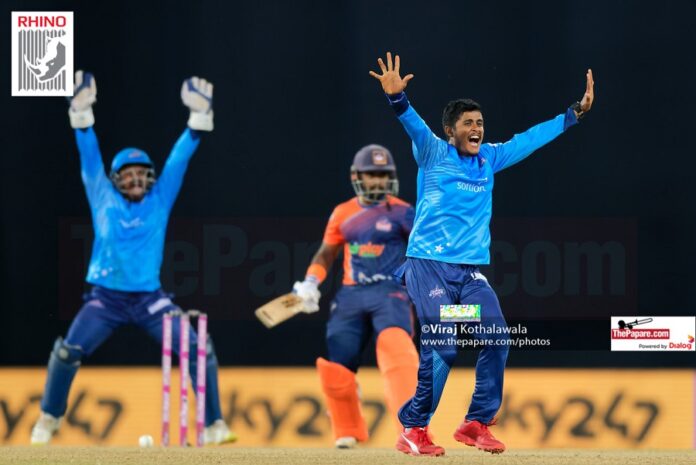 Colombo Stars produced a clinical all-round performance to beat Kandy Warriors by 58 runs in the final league match on Sunday at Khettarama, to secure their place in the Play-Off stage of the Lanka Premier League 2021.

With this win, Colombo climbed to the third position in the points table and will play Dambulla Giants in the Eliminator on Sunday. After being asked to bat first, the Colombo Stars notched up their highest score in the competition – 182 for 6 – before Jeffrey Vandersay took 6 wickets to bundle out Kandy Warriors to 124.

In the most important game for Colombo Stars, left-handed dasher Kusal Perera fired at the top of the order to set the tone. The Colombo Stars managed to score 60 runs in the powerplay as Kandy bowlers struggled to curtail the powerful Colombo batting.

Before this game, Perera had only scored 35 runs in 5 innings for the Stars. He went on to score 58 runs in 38 deliveries with 6 fours and 2 sixes. Perera also shared a crucial 79-run stand for the second wicket with Dhananjaya De Silva. Kandy took some crucial wickets to stem the run flow, with uncapped left-arm tweaker Nimesh Vimukthi grabbing 3 for 24 in 4 overs .

After the dismissal of Perera, Colombo Stars’ most experienced pair – Angelo Mathews and Dinesh Chandimal – played out a few overs before unleashing their hitting prowess in the final 4 overs. Mathews started off slowly but ended up scoring at over 180 during his 16-ball 29.

Chandimal, who is in excellent form throughout the tournament, managed to notch up another crucial innings in the latter overs, smashing a quick-fire 29-ball 44 with 3 fours and 2 sixes. He is currently the leading run-scorer of the tournament with 275 runs in 8 innings with an average of 55 and at a strike rate of over 150. Colombo amassed 59 runs in the last 4 overs which proved to be costly in the end for the Kandy Warriors.

Chasing a mammoth 183 runs to qualify for the play-offs, Kandy’s big-hitting opener Kennar Lewis smashed 3 sixes in his short stay of 21 off 11 deliveries. However, leg-spinner Vandersay picked up three top order wickets to put the Colombo Stars on top. He came back to pick up 3 lower order wickets as well to finish with brilliant figures of 6 for 25 in his 4 overs.

Kandy’s chances were pinned on Englishman Ravi Bopara, who made a 31-ball 47 with 5 fours and a six. However, Seekkuge Prasanna cleaned him up with a beauty, and then two balls later castled Kandy Skipper Angelo Perera for a duck as the Warriors were 5 down for 93 runs in 10 overs. Kamindu Mendis and Asela Gunaratne strung up 30 runs for the 6th wicket, but Colombo held their nerve to seal the game without any major hiccups. Play-offs Fixtures