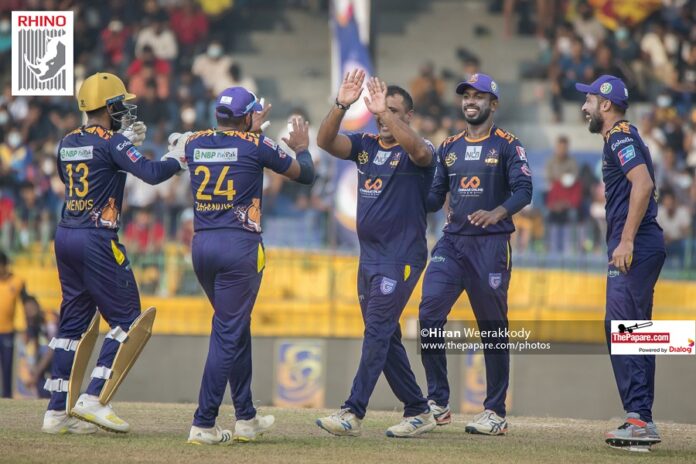 Galle Gladiators secured a place in the Qualifier 1 of the Lanka Premier League 2021, when they defeated Jaffna Kings by 20 runs in the penultimate match of the league stage on Friday at R. Premadasa International Cricket Stadium

The Qualifier 1 will be played between the table-toppers Jaffna Kings and second-placed Galle Gladiators on 19th December in Hambantota. Having only made 129 runs, Galle managed to bowl out Jaffna to just 109 runs and recorded their 4th win in the competition.

Galle Gladiators, after opting to bat first, struggled their way to 129 runs from their 20 overs. Skipper Bhanuka Rajapaksa top-scored for the Gladiators with a hard-fought 23 off 25 balls. On a pitch which offered plenty of assistance to the slow-bowlers, run-making was quite difficult. Danushka Gunathilaka scored at a poor strike-rate of nearly 60 for his 32-ball 19.

Young leg-spinner Vijaykanth Viyaskanth once again put up a stellar performance with the ball, picking up 2 wickets for 21 runs, while left-arm spinner Praveen Jayawickrama, playing his first game in the tournament, took 2 wickets for 13 runs off his 4 overs.

Chasing 130 runs to win, the Jaffna top order failed to fire as the Galle spinners spun a web around with some tight bowling. None of the batters were able to make an impactful knock during the chase. The foreign spin duo, Samit Patel and Noor Ahmed, picked up two wickets each to derail the Jaffna chase. Mohammad Hafeez’s diving catch brought an end to the Shoaib Malik’s cameo of 23.

Jaffna’s last hope Ashen Bandara, who made 18 off 9 balls, was dismissed courtesy a run-out as Galle recorded their second consecutive win over the high-riding Jaffna outfit, having won their fixture (first match of the LPL 2021) by 54 runs. Earlier, Jaffna Kings made six changes to their team from their previous game against Colombo Stars.