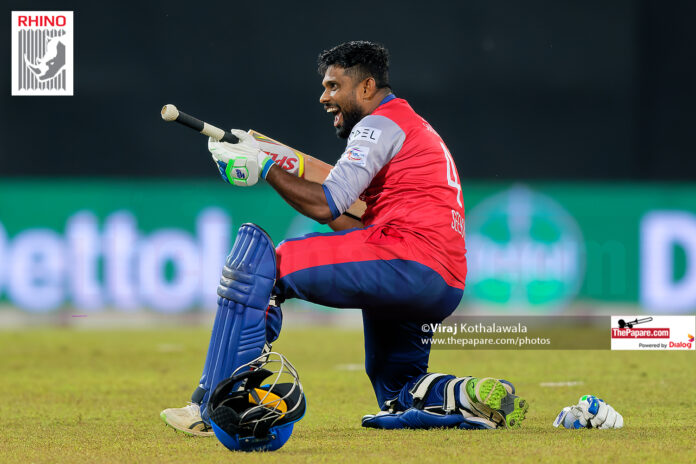 Seekugge Prasanna smashed 5 sixes on his way to 32 off 6 deliveries to see the Colombo Stars through to a tense win in Match 15 of the Lanka Premier League.

Prasanna came in with the game well within the Warriors’ grasp with the Stars needing 37 off 13 deliveries but the right-hander always manages to produce some big hits when needed and he did so today as well.

The first ball he faced sailed over deep midwicket, the 2nd flew over square leg. With the target down to 16 off the last over, Prasanna was desperate to get on strike and when he did, he clobbered Lahiru Kumara for three consecutive sixes to give the Stars.

It was like the T20 World Cup all over again for Kumara, who continued to bowl the wrong lengths and got the treatment.

Earlier in the day, Dushmantha Chameera picked up 4/35 to restrict the Warriors to 146 after they had gotten to a blazing start thanks to Kennar Lewis.

However, the Warriors struggled to get going from that point onwards, managing just 85 off the next 14 overs, including 14 off the last, which brought some respectability to the total.

Chameera was the one who turned the momentum for the Stars, bowling a number of dots to Lewis, who became frustrated when he was unable to find the boundary as easily as he had done early in the innings. Add to this, the wickets began to fall of the other end, with none of the Warriors’ middle order batters able to get to double figures.

The Stars chase was going badly with one of the batters able to score at even a run a ball and curiously, their in form batter Dinesh Chandimal was held back until 4 wickets had fallen and the required rate had risen to over 10 an over.

Chandimal ended with 44 off 27 but the win was made possibly thanks almost exclusively to Prasanna’s explosion at the end.

Nimesh Vimukthi and Sachindu Colombage were impressive once again, but their efforts went in vain.