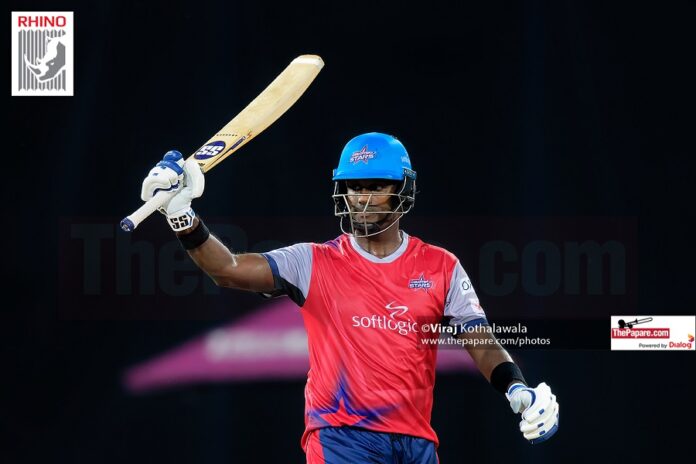 Angelo Mathews struck a match-winning 73 in his return game as Colombo Stars defeated Galle Gladiators by 41 runs in the 13th match of the Lanka Premier League 2021 played on Sunday night at R. Premadasa International Cricket Stadium.

Colombo Stars batting was anchored by Mathews’ 73 and Dinesh Chandimal’s quick-fire 36 as they posted 162 for the loss of 7 wickets from their allotted 18 overs. In reply, Galle Gladiators were restricted 121 despite Kusal Mendis’ masterful 64.

Surprisingly, Colombo Stars opened the batting with Pathum Nissanka and Angelo Mathews, who is playing his first game of the competition, having missed out the first half due to an injury.

Despite losing Nissanka early, Mathews combined with Ashan Priyanjan to add vital 64 runs for the 2nd wicket. Priyanjan departed in the 9th over after scoring a 23 off 16 balls. Mathews played some excellent strokes during his 57-ball 73 which had 8 fours and 3 sixes. Mathews’ 73 remains the highest individual score of the tournament thus far.

Tom Banton and Seekkuge Prasanna could not trouble the scores much, but the star from yesterday, Chandimal, continued his good form, with a blitzkrieg 14-ball 36 to provide the much-needed late impetus to the Colombo Stars innings. Chandimal struck 4 fours and 2 sixes to accumulate runs at a healthy strike rate of 257.

Chasing a stiff target of 163 runs in 18 overs, Galle Gladiators were kept in the hunt by Kusal Mendis, who finally looked like in some quality touch. He played some exquisite strokes to reach his first fifty of the tournament in 28 balls. Mendis went onto make 64 off 29 balls before holing out at deep square leg as Galle Gladiators lost any hopes of reaching the target. Apart of Mendis, none of the other batters found any sort of rhythm during the chase.

The Gladiators were well placed on 100 for 3 at one stage, but they lost their last 7 wickets for 21 runs as Afghanistan seamer, Naveen ul-Haq picked up 3 wickets for 27 runs. Ravi Rampaul and Seekkuge Prasanna took two wickets apiece as well for Colombo Stars.

Earlier, Colombo Stars won the toss and elected to bat first but the game was delayed by an hour due to a persistent drizzle. The match was reduced to an 18-over encounter.