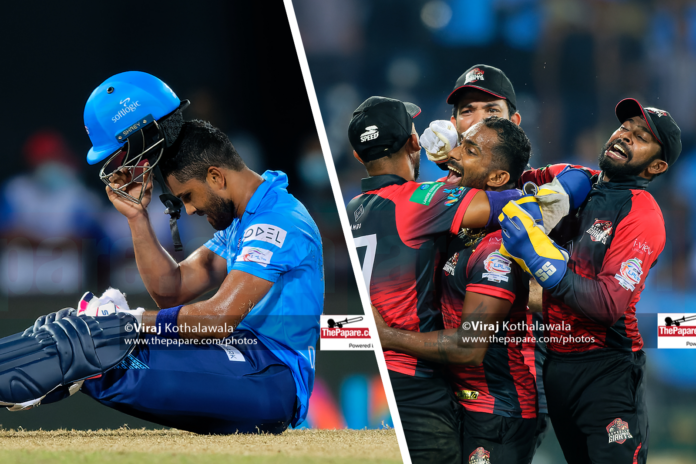 Dambulla Giants skipper Dasun Shanaka won the toss and chose to bat first. Giants made one change for their playing XI bringing in Sachitha Jayathilake for Dilshan Munaweera.

On the other hand, Colombo Stars have made two changes bringing in Ravi Rampaul and Jeffrey Vandersay replacing Keemo Paul and Thikshila De Silva.

Opening the batting, Dickwella and Salt once again got off to a flying start adding 48 runs off 30 balls before leg spinner Seekkuge Prasanna broke the partnership sending both the openers back to the hut in a space of five balls in the sixth over.

Shoaib Maqsood and Tharindu Rathnayake who got a promotion up the batting order built a decent 35-run partnership for the third wicket but the leg spinner Jeffrey Vandersay who was playing his first game of the tournament strike twice in two consecutive balls to dismiss both the batters putting Giants in trouble at 88 for 4 after 12 overs.

Giants vs Gladiators ends in no-result due to rain

There was no rhythm into the latter part of the Giants innings as well as they stalled in the last few overs and were restricted to 138 for 9 in the allotted 20 overs.

Chasing 139 to win, Stars lost their opening batters Tom Banton and Kusal Perera inside the first 4 overs for just 17 runs. Giants’ spinners continued to put pressure on Stars’ batting lineup as they were struggling at the middle except for Chandimal who held one end playing an anchor role for Stars.

Chandimal played a blinder of an innings scoring an unbeaten 65 runs off 40 balls with 4 fours and 3 sixes but the Giants held their nerves at the end to snatch a 1-run thrilling win.