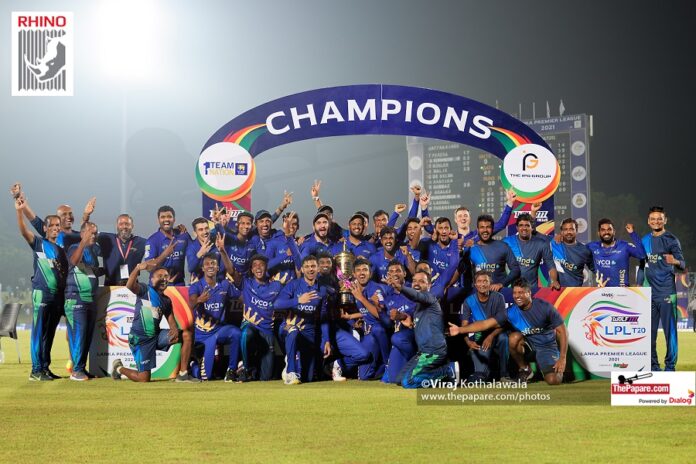 Jaffna Kings crowned LPL champions for the second time in a row as they beat Galle Gladiators by 23 runs in the final of Lanka Premier League 2021 held today (23rd Thursday) at Sooriyawewa International Cricket Stadium.

Jaffna Kings skipper Thisara Perera won the all-important toss in the final and chose to bat first with an unchanged side whereas Galle Gladiators strengthened their batting bringing in Ben Dunk and Dhananjaya Lakshan replacing Sahan Arachchige and Anwar Ali.

Avishka Fernando and Rahmanullah Gurbaz opened the batting for Jaffna Kings and provided a flying start putting on a 56-run partnership in 6.2 overs before Gurbaz fell for 35 runs as a result of a miscued short of the bowling of left-arm spinner Samit Patel.

Fernando and number three batter Kohler-Cadmore piled on the runs as they built a 63-run partnership off 44 balls for the second wicket. Fernando continued his rich form with another stunning knock of 63 runs off 41 balls with 8 fours and 2 sixes.

Kohler-Cadmore also scored a crucial half-century (57*) in the big stage as Jaffna Kings posted a mammoth total of 201 for 3 in the allotted 20 overs. Dropped catches and multiple misfields hurt Gladiators in the field as they had to chase over 200 on the big final.

Chasing 202 runs to win, Gladiators needed a strong start to their innings which is exactly what Mendis and Gunathilaka did as they put on a blistering 63-run partnership in 4.1 overs. Gunathilaka went all guns blazing at Galle bowlers smashing 54 runs off 21 balls with 7 fours and 3 sixes.

After the dismissal of Gunathilaka, Gladiators slowed down a bit with the fall of 3 quick wickets in 13 balls putting them under some pressure at 84 for 3 in 6.2 overs. Mendis managed to hold onto one end playing an anchor role but with his dismissal in the 14th over put an end to the hopes of Gladiators as they handed a 23-run victory for Jaffna Kings.