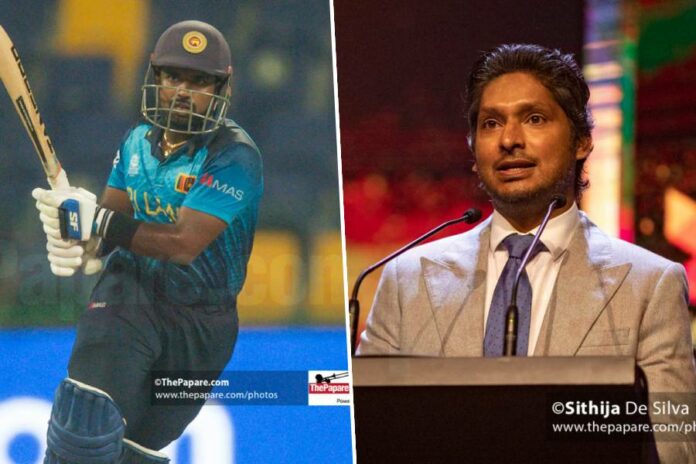 “I think Charith Asalanka has done extremely well. He looks like the caliber of player who will have a long career, score a lot of runs, and win a lot of games for Sri Lanka,” Sangakkara told a few Sri Lankan journalists covering the ICC Men’s T20 World Cup during a virtual interaction from Colombo.

Asalanka batted with great authority in all 6 of his innings, maintaining a strike-rate of 147. His knocks of 80 and 68 against Bangladesh and West Indies respectively paved the way for Sri Lankan wins. With Sri Lanka failing to fill the shoes of Sanga at number 3 for many years, it looks like the problem has finally being solved with the introduction of Asalanka.

Read – ‘I am comfortable batting at No.3’ – Charith Asalanka

“His ability to deal with both good spin and good pace is terrific. He seems to have a fearless approach, which is good to see. When the side was in transition, there were various things that needed to be set in place. The thing that will come into any player’s mind is a little bit of fear. Fear to fail; because you might feel the fear to take a risk as you could be dropped. The ability to take on the challenge puts reverse pressure on the opposition. Charith seems to have come to terms with all of that. He’s got the poise. He’s got the game. From here on, it’s about getting his mental skills together; his game organization and adjusting from surface to surface, country to country, opposition to opposition. There’s a huge amount there already visible to say that he’ll be an excellent player. “ Sangakkara further stated.

A member of the 2014 winning outfit for Sri Lanka, Sangakkara labelled the 2021 campaign as ‘encouraging’ with young, inexperienced players stealing the limelight. Despite not making the semi-finals, Sri Lanka defeated Bangladesh and West Indies in the Super 12 and managed to push South Africa into a final over clash, while competing strongly against England and Australia. They brushed aside their Round 1 opponents, Namibia, Ireland and Netherlands quite comprehensively, making it five wins out of eight games.

“I think overall, it’s been such an encouraging performance going into this tournament. Everyone knew it was going to be a daunting task. There were questions in everyone’s mind, and rightly so, as to will this be the right team? Are these players capable of competing on the international level in such high-pressure tournaments? And what it is that Sri Lanka, as a team with the history and the traditions we’ve had in top-class cricket, really show of themselves in a T20 World Cup, and it’s been such a heartening sight to see the way this team has gone about it. They’ve played very good cricket. They’ve looked fearless. They’ve looked organized in most phases of the game. “ Sanga praised the performance of the young Sri Lankan team led by Dasun Shanaka.

Even though Sri Lanka failed to secure automatic qualification for the Super 12 stage of the ICC Men’s T20 World Cup 2022 as they sit in 9th place in the ICC rankings ahead of the cut-off date, 15th November 2021, Sangakkara reckons that Sri Lanka will be a force to reckon with in the future with this current bunch of players.

“The journey is just starting. And all of you would have seen you spoke about Charith [Asalanka] a lot. But if you take the whole unit in one, Wanindu Hasaranga today is the number one T20 bowler in the world, at such a young age, and you see that you have the beginnings of a side, if continuously and consistently developed, have the makings of a side that will be a significant force, especially in white-ball cricket.”

Sri Lanka’s next confirmed T20I assignment will be in February 2022 in Australia where the Lions will take on the Kangaroos in a five-match series.