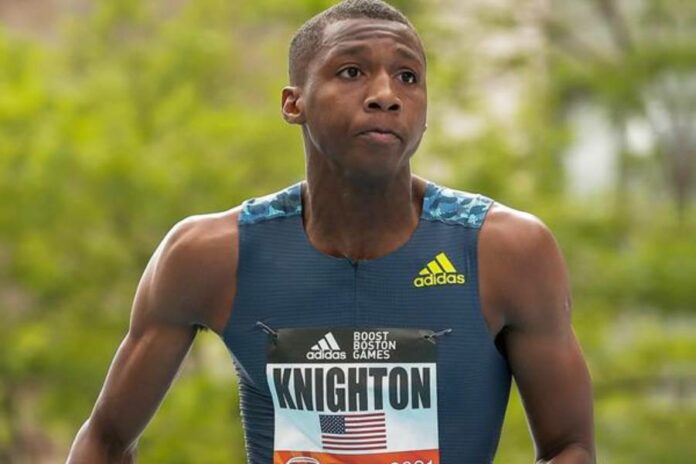 After a string of 200m victories and some swift – albeit wind-assisted – times over 100m in the past two months, 17-year-old Erriyon Knighton finally entered the record books with his 20.11 200m win at the Duval County Challenge, a World Athletics Continental Tour Bronze meeting, in Jacksonville on Monday (31).

Knighton, who hails from Tampa in Florida, turned professional at the start of this year and has been mixing it with the world’s best during the outdoor season. He clocked a wind-assisted 9.99 over 100m in Clermont at the start of May and followed it with a 200m PB of 20.30 at the World Athletics Continental Tour Gold meeting at Mt SAC. More recently, he won the future stars 100m race at the Continental Tour Gold meeting in Boston, clocking 10.16.

In Jacksonville, however, Knighton made another step up in class, taking on some of the world’s biggest sprint stars.

Drawn in lane three, Knighton got off to a solid start and trailed European champion Zharnel Hughes and 2016 world indoor 60m champion Trayvon Bromell as they entered the straight.

Bromell briefly edged in front while Hughes faded slightly, then Knighton held his form well to take the lead, crossing the line in 20.11 (1.6m/s) to take 0.02 from the world U18 best set by Usain Bolt back in 2003.

Bromell finished second in 20.20, his fastest time for five years, while Hughes was third in 20.30.

Shamier Little improved her own world-leading 400m hurdles mark by more than half a second, dominating the race to win in 53.12 – the second-fastest time of her career.

Jamaica’s Ronda Whyte was a distant second in 54.33. Dalilah Muhammad, competing in a separate heat, clocked 55.01 in what was her first hurdles race since breaking the world record to win the world title in 2019.