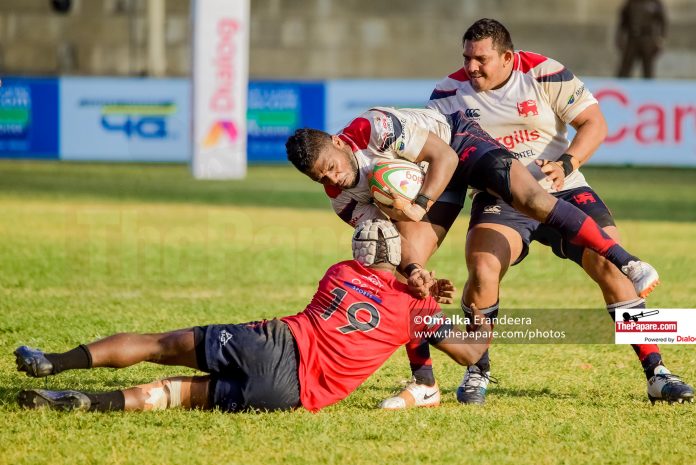 Kandy SC managed to secure their unbeaten record after a second-half onslaught saw them gun down the boys from Longdon Place by a comfortable 24-point margin down at Nittawela today evening. The score line read 39 points to 15 in favor of the league table toppers.

Buddhima Piyarathne managed to draw first blood for the hosts with an unconverted try as Kandy appeared to be making their intentions clear with 3 minutes on the clock. (Kandy 05 – 00 CR)

However, CR showed clear signs of aggression since the restart but to no avail as several unforced errors near the Kandy twenty-two prevented them from troubling the scores early on in the game. The visitors managed to finally open their account in the 27th minute off a successful straight forward penalty conversion by Murshid Zubair. (Kandy 05 – 03 CR)

Kandy replied 8 minutes later as Buwaneka Udangamuwa managed to place the ball beyond the whitewash off the ruck, but Tharinda failed to convert his second two-pointer of the day off a tight angle.

Overall, CR dominated possessions in the 1st 40 minutes but only had themselves to blame for the unforced errors that cost them the opportunity to take the upper hand against Kandy going into the half time break.

Tharinda Ratwatte kick-started the second half for the hosts, where they did not waste much time in opening their account thanks to a touchdown by Damith Dissnayake in the 45th minute. Tharinda managed to make his first conversion of the day as the former CR fly-half became the first player to reach the three-figure milestone in the Dialog Rugby League 2019/20. (Kandy 17 – 03 CR)

A few minutes later, Kandy faced a major setback number 4, Suhiru Anthony was sent to the sin bin for collapsing the scrum.

CR finally managed to secure their first five-pointer for the game as Supun Warnakulasooriya managed to ground the ball over the whitewash with the help of a well-orchestrated CR rolling maul. (Kandy 17 – 08 CR)

The tables changed in the 65th minute as CR was reduced to 14 men with skipper Omalka Gunarathne being sent to the sin bin due to a dangerous tackle on Tharinda Ratwatte. Kandy were quick to pounce on the one-man advantage as Damith Dissanayake scored his try of the day. Tharinda cashed in with his second conversion. (Kandy 24 – 08 CR)

Kandy registered five more points at the restart as Nigel Ratwatte managed to pick up a CR loose pass and pop the ball to Srinath Sooriyabandara, who ran a good 50+ meters to place the ball beyond the try-line though Tharinda failed to cash in with the extras.  (Kandy 29 – 08 CR)

Both teams were reduced to 14 men after Mohomad Shabeer was sent to the sin bin in the 73rd minute. Two minutes later, Kevin Dixon came up with a CR reply in the 75th minute where Reeza Rafaideen completed the seven pointer. (Kandy 29 – 15 CR)

Bawantha Udangamuwa possibly placed the final nail in the coffin as he went over the whitewash in the 78th minute, but the boy with the triple figures under his belt this season, Tharinda Ratwatte managed to seal the game for the hosts with a straight forward penalty after converting Bawantha’s try.

The Kandyan spectators were certainly entertained in the second half by their heroes after a pretty modest performance by both the teams in the first 40 minutes of the day’s play. The hill country giants seemed to have already secured the league title for another year and will be looking forward to battling it out against the Gymkhana Club and Police SC in the coming weeks.