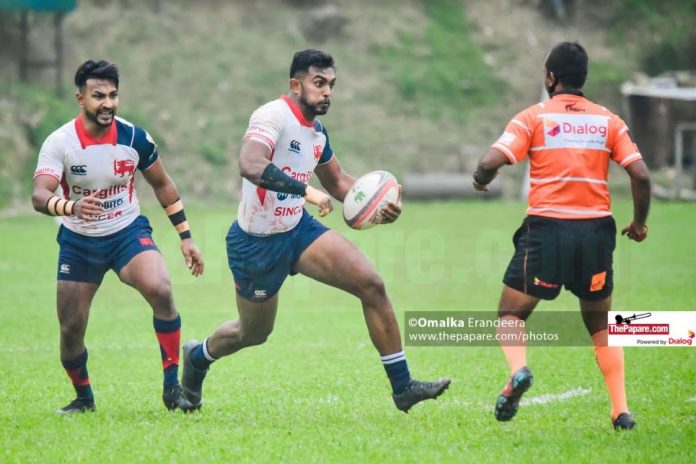 Kandy SC managed to overcome the Gymkhana club’s challenge up at Nittawela, beating the visitors 38 – 22 at the end of full time. Scoring three tries and leading 19 – 8 in the first half, Kandy earned another bonus point victory extending their lead in the league table. 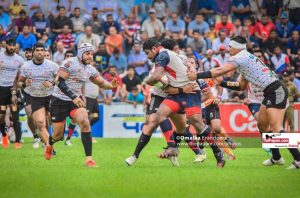 The league’s second highest points scorer, Samuel Maduwantha, kick started the game amidst the roaring Kandy crowd. The gritty Maitland Crescent men were calm and composed early on which resulted in the visitors drawing first blood. Six minutes into the game Sudam Sooriyarachchi scored a fabulous try after the two Perera’s – Nishon and Hirantha, put the nippy scrum half into space. Although Samuel missed out to add the extra two, he slotted in a three pointer 5 minutes later. (KSC 0 – 8 CH)

However, that was all CH managed to accumulate as Kandy unleashed themselves on their home turf. Three tries in quick succession saw the defending champs, go into lemons with a convincing lead. It all started when Danush Dayan scored a fantastic try in the far corner after his team members sucked in the defence opening space on the outside. Skipper, Richard Dharmapala and #8 Buwaneka Udangamwua got their names on the score sheet as well after two brilliant set piece moves. Thilina Weerasinghe made no mistake with his kicks making sure Kandy maintain a steady lead.

Coming back into the game was CH, who from the restart, were showing that sense of urgency and extra effort to upset the home team. 52 minutes later, hooker, Prasad Madhushanka went over the whitewash scoring CH’s second try. Samuel’s kick sailed straight through the uprights as CH cut the deficit by 7 points. But, hell broke loose when Kandy’s key quarter-back, Danushka Ranjan, cut open the CH defence and , after showing great strength in his fend and steps which took him all the way through to the try line. Wijesinghe was spot on with his kick. (KSC 26 – 15) 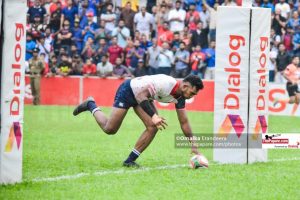 As the game approached it’s final quarter, a stoppage of 6 minutes took place due to a confusion in the CH bench. However, Madhusanka got a double,  after he snuck through from the back of a driving maul and ended over the whitewash. But, Arshad Jamaldeen and Shashika Jayawardena had the final say of the game, when they both scored in the 67th and 72nd minutes of the game denying a comeback from the revamped CH side. Maduwantha was successful with his kick whilst Weerasinghe only managed to kick one of the two successfully. (KSC 38 – 22 CH)

WHAT WENT WRONG FOR CH?

It’s true CH got big names to their likes, but what the lot needs to understand is that to win matches they have to play like a team. Similar to what happened with Army, the CH bunch just did not click together.

Another downfall in their performance came from the defensive department – poor organization and communication led to the 5 tries that Kandy scored. For instance, had Henry Terrance stayed up in the first line of defence, Jamaldeen wouldn’t have scored an untouched try.

WHAT WENT RIGHT FOR KANDY?

Knowing when to work the line and when to play it close gave Kandy the upper hand as Roshan Weerarathna marshaled his troops extremely well. Another positive habit Kandy have picked is countering and forcing the turnover from the ruck. It helped them heaps, and also rewarded them with two tries.

The defending champions knew exactly what they were doing! They controlled the game and played it to their pace. Although CH scored the first try, Kandy stayed calm and absorbed the pressure well. Udangamuwa and the forwards yet again had a fantastic game, and so did the backs. It was an all-round performance that held strong behind Kandy. Something CH could learn from the high running Kandyans.