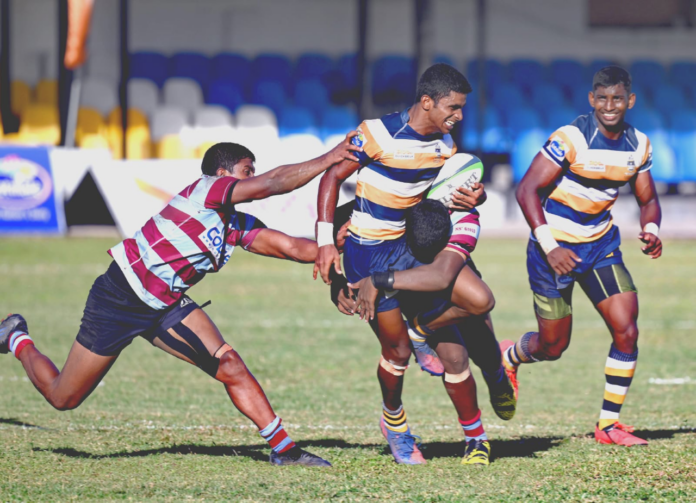 St. Peter’s College began their 2022 Dialog Schools Rugby League campaign with a victory over Dharmaraja College 27 points to 12 at Bambalapitiya.

The Peterites posted a formidable outfit entering the fray as favourites after winning the Dialog Schools Rugby 7s Western Province competition. Meanwhile, Dharmaraja came in with an experienced XV with some promising youngsters.

The home side began with real intent and crossed the line after just seven minutes, when Kushan Tharindu at pace and broke through two Rajans tackles and offloaded to Dineth Ranasinghe to score the opening try, while Windya De Mel added extras from difficult angel.

The Peterite forwards dominated possession soon after the first try as their rolling maul gained some valuable yards, and Hooker Methusara Wishmitha broke away from the maul to open up space to send his half back Rajith Ekanayake over the line. (SPC 12-00 DRCK)

The Rajans Forward took over the control of the game as they piled on the pressure by inching closer to the line by putting more than ten phases of pick and goes, as an opportunistic Vanuja Manthrige spotted a gap in the crumbling Peterite defense and went under the posts to open the scoring for the hill capital side.

With St. Peter’s losing Shane Fernando to the sin-bin, Rajans used their advantage – they managed send the winger Vimukthi Bandara over the line to shock the home team just before the break.

The Peterites were under immense pressure after late comeback in the first half from the Rajans. However, the Bamba brigade stood up to the challenge as their backs opened up space with some quick passes, and the Peterite Flanker Ashane Madugaspe smashed his way over the line to break the deadlock. (SPC 17-12 DRCK)

Rejuvenated by the try, the Bamba brigade poured forward with confidence while the Rajans made some unforced errors at critical junctures of the game. The Peterites took the maximum out of the mistakes as they moved the ball wide with real intent. As a result, the replacement winger Vishenka Silva crossed line to score the bonus point try.

St. Peter’s had defended the dying embers of the game well, as Rajans continued attacking to score their third try, but Yumeth Shihara had the last word for St. Peter’s, scoring in the corner for the 5th try of the game to seal the deal for the home side.