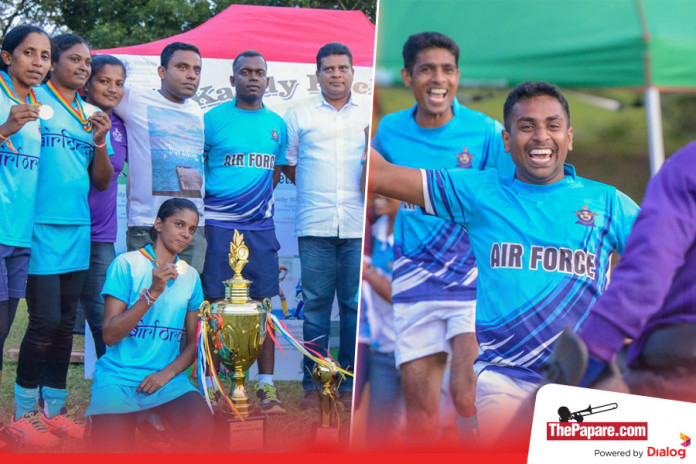 The second and the final day of the Kandy Hockey sixers’ concluded yesterday with a simple closing ceremony. Allan Schofield, India’s former national Hockey captain and 1980 Olympic Gold Medalist was present on the occasion as the chief guest.

He stated that he enjoyed coming to Kandy and would definitely return next year and that the girls hockey players are playing true to their potential and has a bright future ahead of them if the talents are harnessed properly.

Day 02 started off with the remaining day 01 matches and was lead to the business half of the tournament where the knockout stages started in each of the six categories. Today too the rain was eminent and the skies opened up interrupting play for around an hour. However amidst the rain the matches were played afterwards.

The U15’ Girls championship went to the Seethadevi team who remained unbeaten throughout the tournament. They won the final 3 goals to 0 defeating Swarnamali. Dilhani Rajapakshe and Keshika Gunarathne were awarded the best player and the best goal keeper of the tournament, both players were from Seethadevi.

The U15’s Boys champs were Dharmaraja where they defeated St.Sylvesters’ and won it 3-1 on penalty strokes. Harsha Weerakoon and Randun Dharmarathne were the best players of their category. The old Vidyartha team won the Men’s top 14 category, they remained undefeated throughout the tournament and a few national players played in the team as well. Kasun Jayarathne won the best player award while Janith Samarakoon won the award for the best goal keeper.

The tournament ended after the speeches of the respective presidents of the associations. They stated that they will continue this tournament and make it an annual event which is better for the future of Hockey in Sri Lanka.