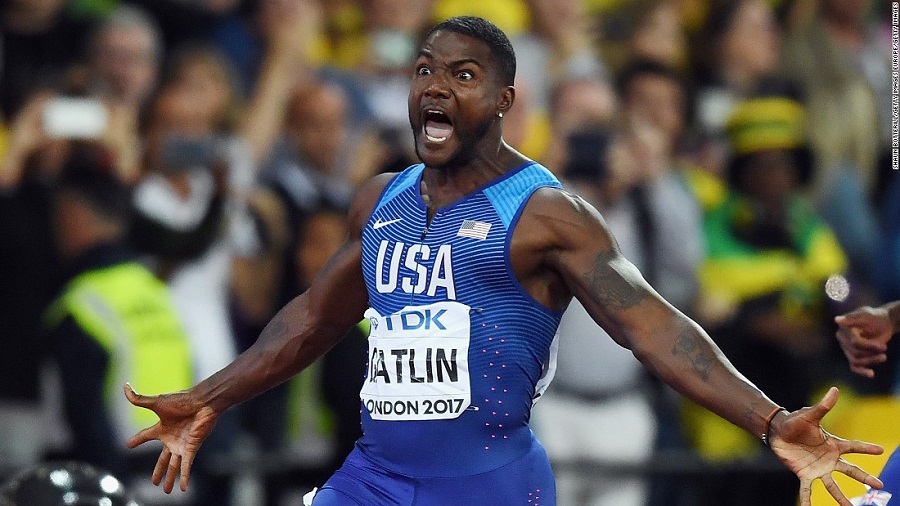 The 16th World Athletic Championships concluded in London and will be remembered as a competition that provided many upsets. The biggest upset of them all was when Usain Bolt was beaten and stripped of his 100m world title by longtime rival Justin Gatlin.

In modern day sport we have superstars who make the whole world fall in love with them, the type that have their posters up on teenager’s walls. Usain Bolt, considered by many to be the greatest sprinter to have taken the track is such a superstar who made millions fall in love with him and athletics.

The subject of our story is considered the exact opposite, testing positive for banned substances on two occasions, he has been called a cheat throughout his career despite having served the bans handed to him. It is fair to say that Justin Gatlin has played the role of villain in the sprint world where Usain Bolt is considered the superhero. 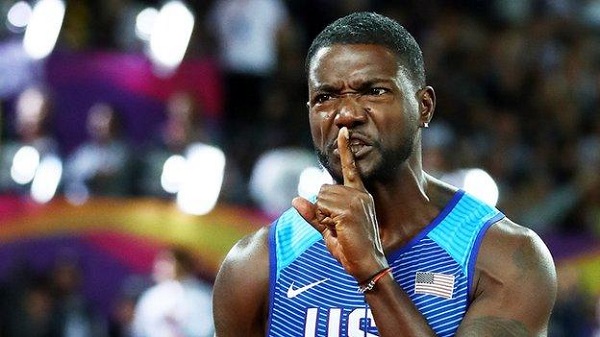 The 56,000-capacity crowd at the London Olympic stadium resorted to loud booing when Gatlin crossed the finish line ahead of Bolt, a feeling echoed also by much of the British media.

“GAT-CRASH –  Usain Bolt sunk as drugs cheat Justin Gatlin ruins golden goodbye by storming to 100m gold.” The headline on The Sun summed up the general view point of the result.

Gatlin had been subjected to the same treatment in the run up to the final during his heats and every time he was shown on the large screens in the stadium.  It warrants a question whether a world champion, whatever his past may be, deserves the treatment he received. When you take a closer look at the whole fiasco, it is clear that Gatlin was made the villain by the media and the masses who blindly followed. 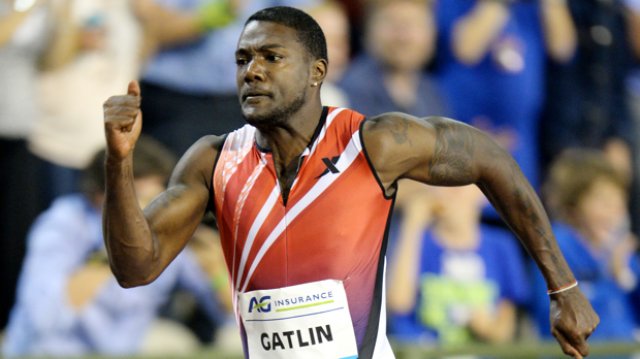 Gatlin, who was raised in Pensacola, Florida was exceptionally talented and achieved great heights during his high school and college days.  The first of the two offenses was leveled against him in the year 2001. Gatlin’s urine sample, which was taken at the USA track and field junior national championships, tested positive for a banned substance named ‘amphetamine’.  This was linked to the medication that Gatlin had been taking for Attention-Deficit Disorder (ADD) since he was 14 years of age.  While this is not a prohibited substance outside of competition, the normal practice is for the athletes to discontinue the medication close to competition dates which Gatlin did. The 19 year old was however guilty of not seeking an in-competition exception which would have been granted to him if he had made such a request.  Gatlin was handed a two year ban in 2002 but two months later the IAAF lifted the ban as he had a genuine medical explanation for his positive test and was cleared to compete.

Despite the stumble early in his career Gatlin rose to world fame when he became the Olympic champion at the 2004 Athens Olympics clocking a time of 9.85secs which was at the time third fastest time in the history of Olympics. Gatlin extended his dominance to the World Championships the following year as he managed to capture the coveted Gold medal to be crowned the 100m World Champion at the 2005 games in Helsinki, Finland.

This great form extended to the 2006 season as well when he managed to create a new 100m world record at the IAAF Super Tour in Doha in May clocking a time of 9.77, establishing himself as the fastest man on earth. The celebrations were short lived. In July the same year Gatlin was suspended from all international competitions for testing positive for excessive testosterone in his system. Gatlin maintained that he had never knowingly taken any banned substance and argued that none of his 36 samples taken prior to that instance have had traces of excess testosterone. He alleged that his physical therapist may have rubbed some testosterone spiked cream on his legs before the competition as a result of a personal dispute which may have led to his urine sample testing positive. Gatlin agreed to an eight year ban imposed on him by the authorities and co-operated with the IAAF in order to escape a life ban. Later in 2007 the ban was reduced to 4 years but Gatlin’s 100m world record was annulled.

While he has served two bans, both of which were reduced, it must be noted that to this date, there has been no ruling that Gatlin ever knowingly taken performance-enhancing drugs. He has not confessed to doing so. While the writer does not try to imply that the athlete is innocent, it needs to be kept in mind that presumption of being innocent until proven guilty is a core guideline in any judiciary.

‘The two time drug cheat’, label has preceded the fact that Gatlin is a two time world champion in most of the media is perhaps unfair. Especially given the fact that American Arbitration Association (AAA), who handed Gatlin his first ban stating that “The Panel specifically notes that, in this case, Mr. Gatlin neither cheated nor did he intend to cheat. He did not intend to enhance his performance nor, given his medical condition, did his medication in fact enhance his performance.” They even went on to comment adding “Mr. Gatlin’s reputation not be unnecessarily tarnished” since he was guilty of, at most, a “paperwork violation.”  This has unfortunately fallen on deaf years given the way Gatlin had been treated by the media since.

In the second instance his allegation that his therapist had motive and had tried to sabotage his career using testosterone spiked cream can be claimed as farfetched, it needs to be noted that in the legal world of doping the burden of proof falls on the athletes who fail the tests and Gatlin, who could not provide enough evidence to prove the allegations, was handed a ban which was later reduced. 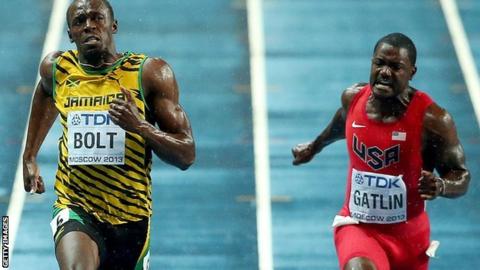 Having made his return to racing in 2010 Gatlin made the slow but steady progress on his timing and managed to qualify for the 2012 Olympics in London. He beat his compatriot Tyson Gay in the USA national trails to gain entry to the Olympics. This is probably when Gatlin actually entered the bad books of media and the public who were head over heels in love with the happy go lucky Jamaican as the two athletes had plenty of talk prior to the race. It was Bolt who was the ultimate winner in a race where two Jamaicans were placed 1st and 2nd with Yohan Blake coming in second. Gatlin had to be satisfied with a bronze even though he ran the best time of his life at 9.79. At the Rio Olympics it was Bolt who again clinched Gold with Gatlin ending up with silver.

The year 2017 show the emergence of a much more dedicated and a media savvy Gatlin. All the fanfare and attention was focused on Bolt with his retirement preceding the World Championship. Bolt had a troubled season where he struggled with injury and was not consistent with his timings in the run up. Gatlin on the other hand has kept improving to the run up to the final. 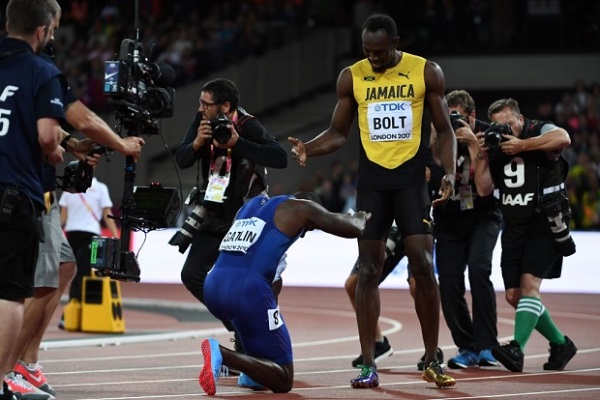 There was a shocked silence at the London Olympic stadium when the race was over, was it Coleman? Was it Bolt? The realization that the thus far unbeaten Bolt had been beaten in his last race took a few seconds to be accepted. But when the official results came on the screen it was Gatlin who was the first to cross the line and the booing started immediately. Usain Bolt, the gentleman he is, came immediately to Gatlin to congratulate him on the victory.  But what Gatlin did next was remarkable.  He went down on his knees and bowed in front of Bolt. Both athletes embraced each other and it’s reported that Bolt said to Gatlin that he did not deserve the booing.

Winning the World Championship 10 years after you won it last, at the age of 35, competing against the fastest man to ever set foot on the tracks, is by no means an easy feat. Justin Gatlin will go down in the history as the 100m World Champion no matter how loud his haters scream.