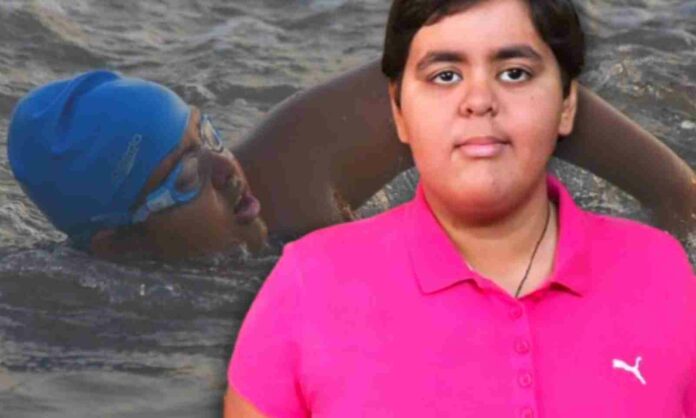 On any given day, swimming across the Palk Strait—the sea channel that connects India and Sri Lanka—is not imaginable.

Imagine doing it on a day when there was a cyclone brewing in the Andaman and Nicobar islands, off India’s East Coast.

Jiya Rai, a special child, completed this feat successfully by covering a distance of 29 kilometres in 13 hours and 10 minutes.

She swam between Talaimannar (Sri Lanka’s north-western coast) and Dhanushkodi (India’s Southern Coast) on Sunday (March 20) when cyclone Asani was inching closer to the Andaman archipelago, not too far away.

WION spoke to Jiya’s father to understand how the parents brought up their special child to become a leading Para swimmer.

When most others of her age played with toys and balloons, two-year-old Jiya Rai had a fondness for water. Be it at home or at playschool, the little one couldn’t just stay away from a bucket of water.

It was around the same time that her parents noticed her to be very different from her peer group—she was always a loner and barely uttered anything.

Doctors diagnosed her with Autism Spectrum Disorder, a neurological disorder that impacts a person’s ability to perceive, socialize and communicate, among other aspects of behaviour.

Undeterred by the condition that their daughter was diagnosed with, and in keeping with the baby’s liking for water, parents Madan Rai, a naval officer and Rachna, a Chemistry teacher, decided to teach her swimming.

“We saw swimming as a form of therapy for her. However, as a six-year-old, it was a swimming competition in her school that brought out her real potential and took everyone by surprise. In every swimming event she took part in, she ended up winning gold medals and all these feats were in record time. That’s when we were advised to help her get a professional swimming coach, in order to further hone her talent. But it wasn’t as easy as we imagined,” recalled her father.

While she was able to communicate with her parents, Jia was unable to grasp what the coach was trying to tell her. In order to help their child, the mother quit her job and started taking swimming lessons from the coach, so as to impart the same to Jiya.

Having understood that the child learns best by witnessing action and visual depiction, the parents prepared a repository of swimming Legend Michael Phelps’ videos and played them out for her.

“The major turning point in our lives was the National Open Water Sea Swimming Championship event in Porbandar, Gujarat, in 2019. Jiya was barely 10-years-old, and we were confident that she would perform well in the 5km swim, but the qualifying age for the event was 14. Luckily for us, after the initial rejection, the organisers allowed Jiya as a special entry after seeing her exploits in the practice pool,” he said.

At the end of that event, Jiya not only bested all other swimmers, but also did it in national record time. She swam 5kms in open sea water. Her lead over fellow swimmers was a whopping 500 meters.

“In February 2021, she swam the 36km distance between Bandra-Worli Sealink and Gateway of India, Mumbai, in under 8 hours and 40 minutes and became the youngest and the first special child with autism to do so. Besides other such long-distance swimming feats, she also has won 24 Gold Medals and 1 Silver Medal in National and State Swimming and Open Water Sea Swimming Championships, over the last three years” her father added.

During her latest attempt on Sunday, she was supposed to begin her swim in the wee hours, but had to delay it owing to strong sea currents and winds gusting up to 36 kmph due to the cyclone that was brewing near the Andamans.

Despite the odds, the young girl commenced to swim at 4.22 am from Talaimannar in Sri Lanka and reached Dhanushkodi, India, by 5.32pm.

Throughout the journey, she was provided escort and search & rescue support by vessels from the Sri Lankan Navy, Coast Guard and also the Indian Navy and Coast Guard, while staying in the waters of the respective countries.

A recipient of the Pradhan Mantri Rashtriya Bal Purashkar (PMRBP), 2022— the highest honour given to Indian citizens below 18 years of age—Jiya, according to her parents, is on a more ambitious mission.

“She is on a mission to become the first and youngest para swimmer of the world by swimming seven oceans,” her Indian Naval Officer father, Madan Rai, signs off.