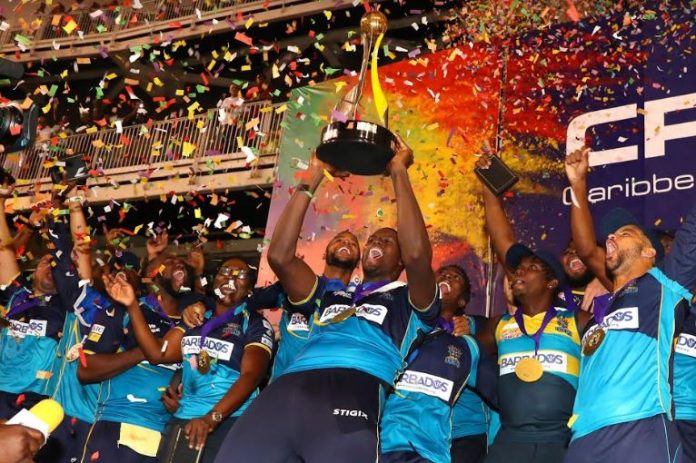 Useful contributions from openers Johnson Charles and Alex Hales, and a blazing 27-ball 50* from Jonathan Carter lifted Barbados to a par score of 171/6, which their Raymon Reifer-led bowling attack defended in style to set up a 27-run victory in the CPL 2019 final against Guyana on Saturday, 12 October.

Opting to bat, Barbados openers Charles and Hales stitched a 43-run stand before the latter was dismissed for 28. They lost wickets at regular intervals including that of Charles, who fell after scoring a quick 22-ball 39.

The Tridents ended Guyana Amazon Warriors’ unbeaten streak of 11 wins, beating them by 27 runs in the final.

What a way to finish 👏 pic.twitter.com/RvuS4WJxBz

Shakib Al Hasan (15) and skipper Jason Holder (1) were both run out by the Keemo Paul and Nicholas Pooran duo, however, Carter’s late impetus and Ashley Nurse’s 15-ball 19* made sure that Barbados had enough runs on the board to claim the title. Carter’s fiery knock featured four fours and as many sixes.

Chasing 172, and also their dream of a maiden CPL title, Guyana got off to a shaky start, losing their opener Chandrapaul Hemraj in the second over for just one. His partner, Brandon King, stayed firm at the crease but failed to find an able partner in Shimron Hetmyer and skipper Shoaib Malik to steady the proceedings as both the batsmen were dismissed for single digits.

The moment where Barbados Tridents became the CPL 2019 Champions earned the Play of the day for tonight! #CPL19 #CPLFinal #CricketPlayedLouder #Biggestpartyinsport pic.twitter.com/AexVYfQc4C

King, who top-scored for Guyana with a 33-ball 43, fell on the last ball of the 11th over with his side stuttering at 79/4, still needing 98 from the remaining nine overs.

Pooran and Paul scored twenties while Sherfane Rutherford made 15, but the rest of the line-up crumbled as Barbados restricted Guyana to 144/9.

Raymon Reifer was Barbados’ star bowler, returning match-winning figures of 4/24, while USA’s Hayden Walsh, who was adjudged Player of the Tournament for his 22 wickets in the tournament – most in this season – snared only one wicket, the prized scalp of Guyana skipper Malik, in his final outing.