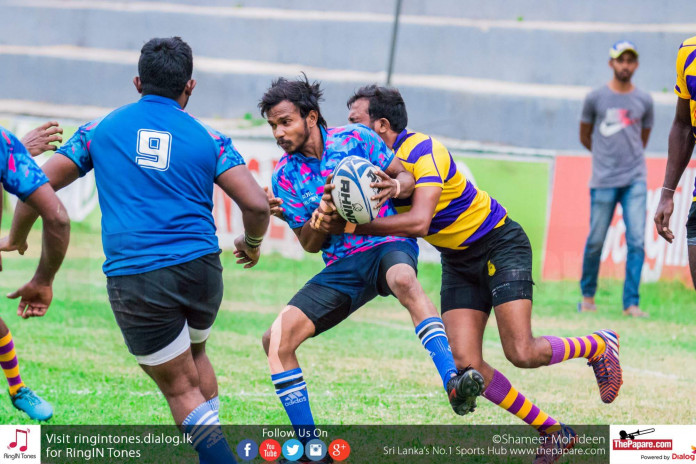 Sri Jayewardenepura University Rugby team qualified for the semi finals of the Inter University tournament after beating Sabaragamuwa University in a close match at the Nittawela stadium earlier this evening. At the end of allocated 60 minutes the score read 19 (3T 2C)  points to 12 (2T 1C)  in favour of Jayewardenepura.

Japura team opened the scoring through their fly half Kosala Pahalagama who showed some excellent footwork before touching down. He converted his own try from under the posts. The second try was a carbon copy of the first try which was also made by Pahalagama himself. Both teams struggled in handling the high balls put in by the opposition kickers. The first half ended without any further pinching of the scores 12 points to nil in favour of Japura.

Sabaragamuwa hit back strongly in the second half scoring two back to back tries either sides of a try which was scored by a Japura player. Soon after the kick off they set up a rolling maul and went over the whitewash. N.Abeysinghe got the try under his belt being the last receiver at the back of the scrum. Japura scored another try through Dinendra Dhanapala who barged his way over the line after receiving a flat pass from his fly half. Pahalagama added the extras with ease. At the dying minutes of the game O.Vinod went over the line with the help of his partner who pushed them over the line. The forwards grind began from the 22m line and they eventually went over the line. The conversion went over and the referee blew the long whistle to bring the game to an end.

The next quarter final of the day took place between the Colombo University and the Rajarata University. Colombo went to the semi finals easily beating the Rajarata team 48 points to 10 points. The first half was a more closer encounter than the second half. In the second half Colombo ran away with game scoring tries unanswered. U.Kannangara scored two tries after running about 80m on both occasions. He showcased pace no other player in the park had. P.Perera and H.Kumara also got tries after making some clean breaks in the Rajarata territory.  At half time Colombo University led 22 points 07 points. The 07 points of Rajarata came through a line out drive which ended up in the hands of S.Rathnayake.

In the second half Colombo accumulated another 26 points in response to the Rajarata Universities 3 points which surprisingly came pretty late in the second half. The pace and the stamina of the Colombo players were far more superior to that of the Rajarata players who tired up easily. The game ended with Colombo qualifying through to the finals. With two teams Japura and Colombo through to the finals there remain another 4 teams still in contention for two spots in the final.

Champion coach to take charge of Sri Lanka U20 7s

Expert panel spearheaded by Marija to oversee U20 operation