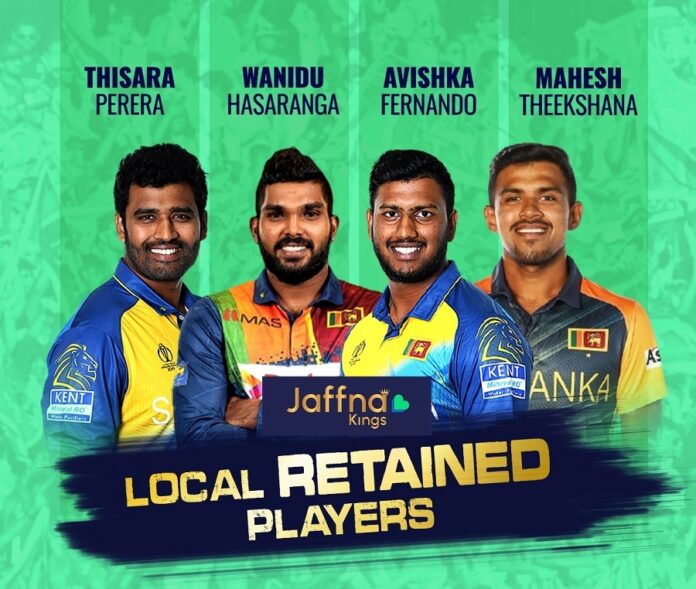 The four players were a part of the Jaffna team that won the championship in the 2020 LPL. Thisara Perera, a seasoned National player, is already announced the Captain of Jaffna Kings. A brilliant right-arm bowler and an aggressive left-handed batman, Perera is a top-performing all-rounder. He is an experienced T20 and ODI player and has hat-tricks in both forms. Thisara has set a number of T20 records which made him a role model for aspiring cricketers.

He played several memorable innings during the previous LPL tournament which sparked admiration among national and international cricket audiences. He has scored unbeaten 60 runs with 7 fours and 3 sixes in 29 balls for the Army Sports Club at Major Club 50-Over Tournament held yesterday (27/10/2021).

Wanindu Hasaranga is a talented all-rounder, who plays for the Sri Lankan national team in all the three formats. An impactful middle order batsman, and a skilled right-arm leg break bowler, Hasaranga was a part of the winning team of last year’s LPL. He is placed second among the best bowlers in T20 rankings and became the only Sri Lankan cricketer to play a match at IPL 2021. Hasaranga became the Hero of the LPL 2020 as well as the highest wicket taker making the tournament a memorable experience for the Jaffna team. His remarkable performance can be seen in the ongoing T20 World Cup tournament as well.

Avishka Fernando is an accomplished right-hand top order batsman who was among the top five highest run getters in LPL 2020. He displayed outstanding skills in the recent T20 match against Oman in which he changed the direction of the game in favour of Sri Lanka. He is aptly called a ‘game changer’ due to his stunning performances in these matches. Fernando is

a top ranked LPL cricketer who gave his utmost to ensure the victory of the Jaffna team in last year’s LPL.

Maheesh Theekshana is a gifted and youthful right arm off break bowler who was also a part of the winning Jaffna team in the previous LPL tournament. Theekshana won the attention of cricket community at his debut international match by taking a wicket with his first ball. The audience also witnessed his mastery in recent international matches for Sri Lanka and he is among leading wicket takers of ongoing T20 World Cup as well. Earning a well-deserved title, Theekshana became the Man of the Match at Abu Dhabi T10 Final this year.

His capabilities earned him the moniker ‘mystery spinner’ by international cricketers and audiences. Apart from the four local players Jaffna Kings will also team up with two international cricketers. Accordingly, Francois du Plessis (Overseas Icon Player) and Wahab Riaz (Overseas Diamond Player) will join the team as Pre-Draft Players. Both cricketers share an impressive track record in playing Franchise cricket tournaments. Such a fiery combination will surely give Jaffna Kings a competitive edge in the upcoming LPL.