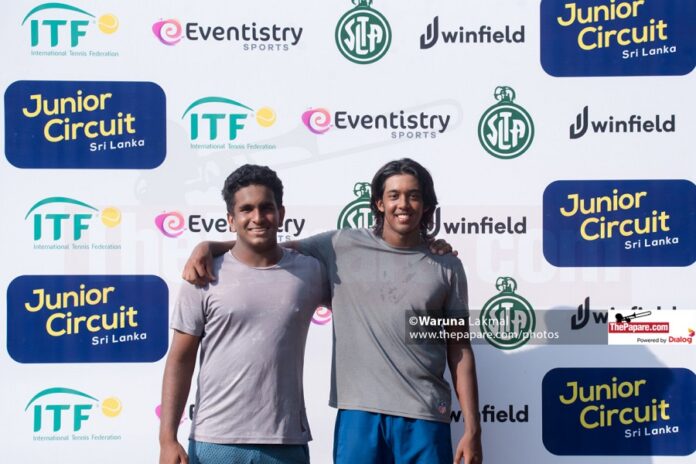 Seven Sri Lankan pairs competed in the Boys Doubles event in a draw of 16 of which the Nilaweera – Viravanathan looked most promising.

They faced off against top rankers Cristian Care (AUS) and Lorant Gyori (HUN) in the very first round and collected a 3-set victory. Scores read 1/6, 6/1 and 10/6 in the super tiebreaker.

Next was an Indo – Sri Lankan battle in the Quarterfinal, with the latter gaining a clean victory of 6/0, 6/0 against Arya Bhattacharya and Omaansh Choudhary Saharia. The semifinal clash was tougher for the local duo but overcame in straights, 7/5, 6/2. The victims, Devaharshith Neelam (USA) and Arjun Premkumar (IND) put up a good fight to advance to the final but failed in their task.

In a fantastic final battle against a pair from Malaysia and Kazakhstan, who were also seeded second in the draw, there was a clear winner at the end of three sets. Hayden Khoo Menon (MAS) and Aldiyar Abzhan (KAZ) took immediate control of the first set but saw their downfall in a tightly contested second set.

Week 2 of the ITF J5 Junior Circuit begins tomorrow on the same courts, days before the SSC Open Tennis Championship.