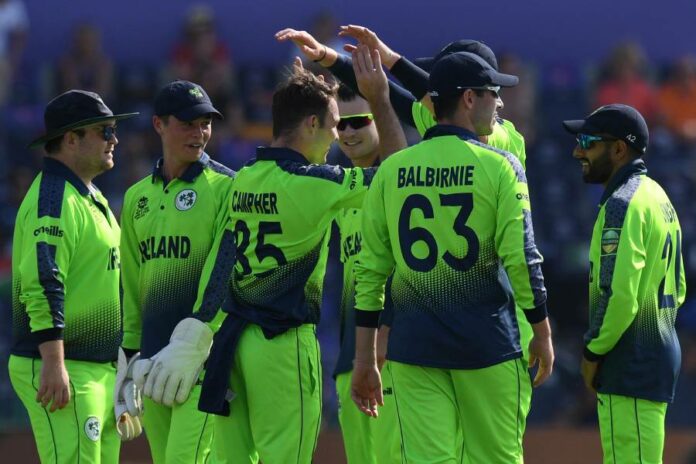 Group A got off to a stunning start at the ICC Men’s T20 World Cup 2021 with Curtis Campher taking four wickets in four balls as Ireland dispatched the Netherlands.

Read More : Bangladesh favourites but expect some tough contests in Group B

Campher’s astonishing four-wicket haul came in the tenth over of the innings after the Netherlands had won the toss and chosen to bat first in Match 3 of the tournament.

The tumble of middle-order wickets saw the Dutch limp to 106 all out. And Ireland made the chase look straightforward, chasing it down with 29 balls and seven wickets remaining.

Disastrous start for the Netherlands

The Dutch got off to a nightmare start with opener Ben Cooper run out from his first ball faced and just the third delivery of the innings.

A misunderstanding between Cooper and fellow opener Max O’Dowd left Simi Singh with the simple task of throwing it to bowler Paul Stirling to whip off the bails.

There was still a need for a third-umpire review, despite Cooper being well short of his ground, as Stirling knocked off one of the bails before the ball had arrived. However, the other bail was not dislodged until Stirling had the ball in his hands, so the run-out was ruled valid.

A solid partnership between O’Dowd and Colin Ackermann seemed to be leading the Netherlands to a workable total, but Campher had other ideas, taking a remarkable four wickets in four balls to rip through the Netherlands’ middle order.

The 22-year-old right-armer picked up Colin Ackermann, Ryan ten Doeschate, Scott Edwards and Roelof van der Merwe in four consecutive balls in his second over and the tenth of the innings to put Ireland firmly in control and leave the Dutch 52/6. Campher became the third man in T20I history to take four in four, and the first to do so in a T20 World Cup match. Only Rashid Khan and Lasith Malinga have also managed the feat, both in 2019.

That the Netherlands still managed to post 106 after Campher’s four-wicket over was largely down to the feats of opener O’Dowd and all-rounders Pieter Seelaar and Logan van Beek.

The former fell just after registering his half-century, dismissed by the exceptional Mark Adair for an impressive 51 off 47 balls.

But captain Seelar and van Beek picked up the baton at the death, registering 21 (29) and 11 (12) respectively to carry the Netherlands to 106 all out, with the last wicket falling off the final ball – a disappointing tally but one that could have been far worse after Campher’s heroics.

Pick of the bowlers

Campher finished with figures of 4/26 from his four overs, with Mark Adair also impressing with the ball.

Adair picked up two wickets in his final over to add gloss to the most economical figures ever recorded by an Ireland bowler in men’s T20 internationals, three wickets for just nine runs off his four overs.

Fred Klaassen’s nervy opening over of the second innings gifted Ireland seven runs, all in extras, and that set the tone for a comfortable chase for the Irish.

Kevin O’Brien (9 off 10) and Andy Balbirnie (8 off 6) both fell in the powerplay, but a destructive partnership between veteran opening batter Paul Stirling (30*) and young all-rounder Gareth Delany broke the back of the target.

Delany’s powerful knock of 44 from just 29 balls featured five fours and two sixes before he fell to Pieter Seelar just one big hit shy of his half-century.

Fittingly, it was Campher who hit the winning runs, knocking a single off the first ball of the 16th over to seal an emphatic seven-wicket victory with 29 balls remaining.