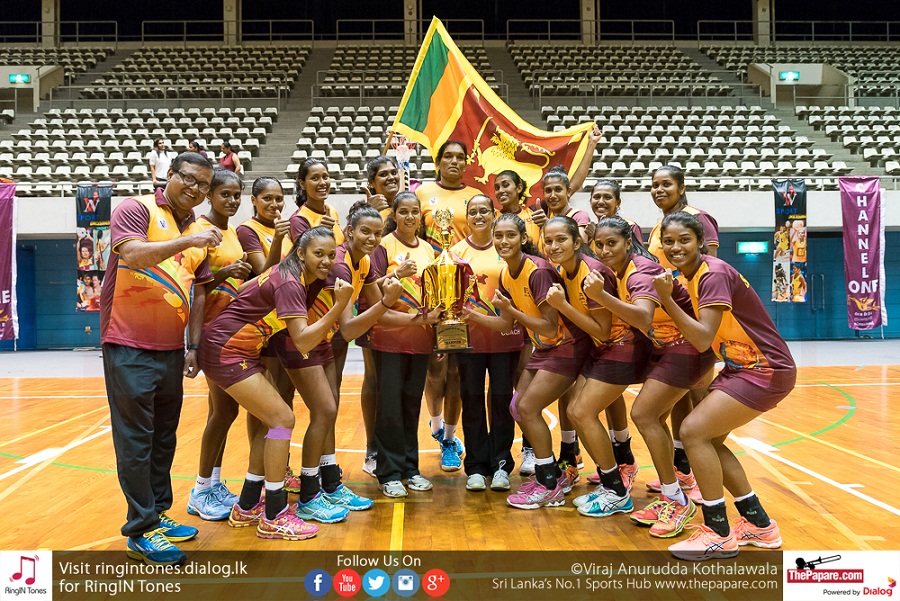 Sri Lanka National pool was stretched to the limit against Singapore but came away with a 72-70 win in the Final of the Invitational International Netball Tournament at the Sugathadasa Indoor Stadium.

Sri Lanka Development pool impressed in a losing cause..

The big showdown between Asian rivals Sri Lanka and Singapore commenced at 5.15 pm with the hosts coming in as favourites. The two teams had earlier met in the tournament opener on Sunday (27th) with Sri Lanka registering a comfortable win 65-45.

The teams had had it easy coming into the finals and had used the games against PStar Netball Club and the Sri Lanka Development team to experiment with their combinations.

The start of the game promised much with the teams going neck and neck through much of the 1st quarter. Lee Pei Shan and Charmaine Soh matched Sri Lanka’s Hasitha Mendis and star Tharjini Sivalingam blow for blow but the hosts took a narrow lead as the 1st 15 minutes of the game ended, going into the break leading 21-18.

Sri Lanka extended the lead to 7 points scoring 20 points in the 2nd quarter while Singapore only added 16. At half time the scores read 41-34.

Singapore came out all guns blazing in the 3rd quarter and took advantage of some sloppy play from Sri Lanka. Singapore tied the at 46 all and took a 46-48 lead but Sri Lanka managed to re-take the lead. Singapore outscored the hosts 15-19 to close the gap to 56-53.

The 4th quarter was equally intense as both sides matches each other point for point. Singapore again outscored Sri Lanka 16-17 but ran out of time as Sri Lanka breathed a sigh of relief.

The young Sri Lankans came into the game having lost their two last games against Sri Lanka (main side) (74-24) and Singapore (80-34) however, were perhaps confident after having defeated the same opponents they faced today in their tournament opener.

PStar on the other hand had shown improvement throughout the tournament, having gotten better with each passing day of the competition and were expected to give the Sri Lankan lasses a good run for their money in this game.

The PStar team looked to fight back in the next quarter but yet again they were countered by a fitter, faster Development team as the teams went into halftime with the scores on 46-8.

The Sri Lankan team rung the changes in the 2nd half and this in turn meant that their scoring rate slowed. PStar went the other way, scoring more goals in the 3rd and 4th quarters than they did in the 1st half, however there was no coming back for them, with the numbers they had conceded in the 1st half hour of play.

Sri Lanka Development sealed the win with a 34-goal run in the 2nd half as the full-time whistle was blown with the scores reading 80-22.

For the local lasses it was yet again Goal Shooter Mellony Wijesinghe and Goal Defense Sethmi Danoshi who were outstanding in attack and defense respectively.